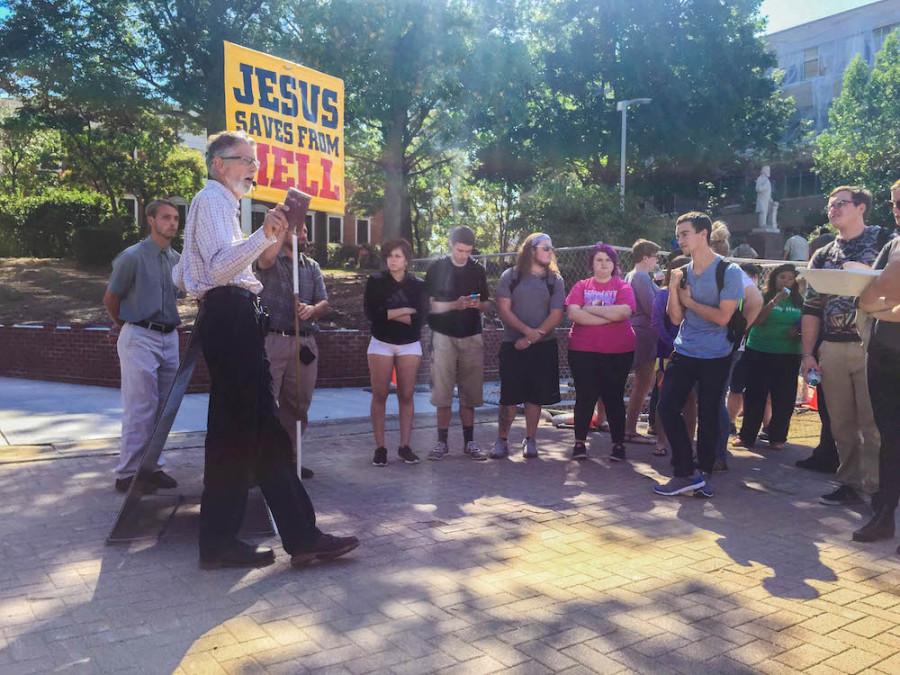 UA was the second stop on the group's month-long college circuit.

Students react peaceably when told they are going to hell.

At least they did on Tuesday, when three men from an independent Christian church in Ohio took up positions outside Leigh Hall to proselytize.

Students might have found their faces familiar, as the men stopped at UA last year while on their month-long college circuit. Monday, they were at Ohio University. They plan to visit two more colleges within the week.

The men are known for their stern injunctions; they bring with them signs and banners censuring such things as homosexuality and sodomy and fornication.

One of the men engaged a large group of students, another paced with a megaphone in front of Bierce Library, and the third explained why the group comes to college campuses.

“It is really good because it is a place for learning, and people are here to learn anyway,” said Nathan Troyer, who is from Michigan and just started traveling with the group. He had never been to UA before.

Troyer said the students are not hostile or ill-tempered, but that most people mock them.

“It seems provocatory to talk about hell and things like that,” Troyer added, “but we feel it’s good to [discuss].”

Students Grace Lopez, a junior, and Anna Avery, a freshman, were standing around the crowd, passing out handwritten slips with friendly, assuring quotes on them.

“They say that you’re awesome the way you are and you don’t need to listen to these jerks,” Lopez said, referencing the notes she and Avery made. “Well, they’re not jerks, but there’s a problem for me when people force their opinion on someone else.”

“Their message would be a lot more effective if they went about it without telling people right off the bat, ‘Hey, you’re bad and you’re going to hell,’” Avery said, “instead of saying ‘hey, take some time to consider what we think.’”

The men will return to UA’s campus next semester.