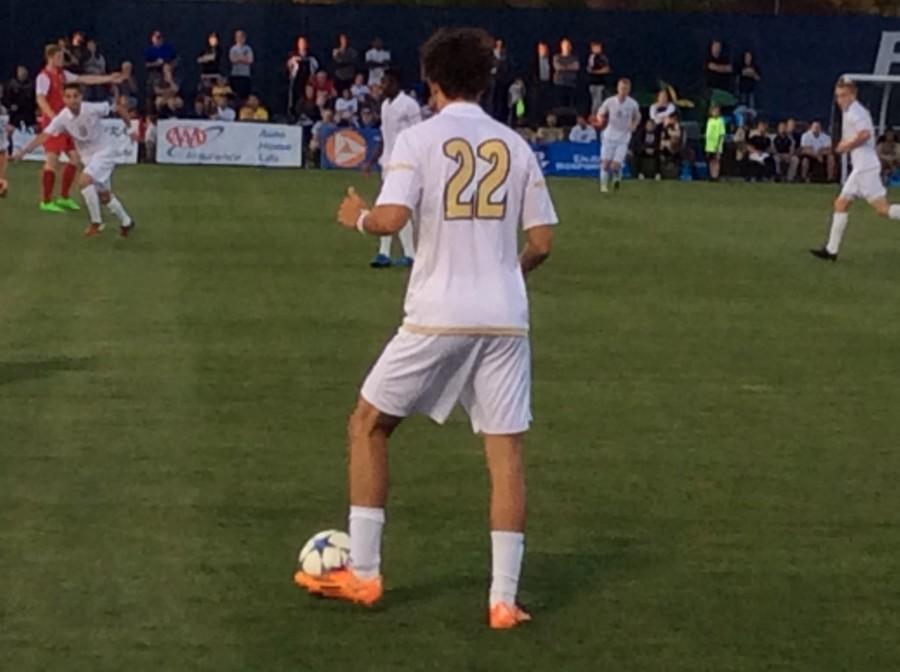 Robbie Dambrot looks to pass to a teammate.

Akron and Ohio State fought to a hard-fought 3-3 draw in front of 3,889 fans on Wednesday night.

The Zips opened the scoring right from the start, with Sean Sepe playing a ball off his chest and into the back of the net in the 8th minute, puttimg Akron up 1-0.

The two teams would battle back and forth for the remainder of the first half, yet the Buckeyes would mostly control play and possession, out-shooting the Zips 7-6. Despite the slight advantage in shots, Ohio State still trailed 1-0 at the mid-point of regulation

Ohio State answered right back in the second however. Danny Jensen notched the equalizer just five minutes into the second half off an assist from Kyle Culbertson.

Culbertson then got on the scoring end off of a corner. in the 59th minute, sending a ball past Akron goalkeeper Jake Fenlason. The 2-1 Ohio State lead took a little wind out of the sails of the jam-packed student section.

The calm would not last long however, as Akron found an equalizer of their own in the 64th when Sam Gainford sent a low cross past a diving Ohio State goalkeeper, Chris Froscheur, which then found the boot of a sliding Tyler Sanda, and the ball rolled into the corner for the red-shirt sophmore’s first career goal.

The roller coaster ride continued, as Ohio State answered back with a goal from Abdi Mohamed in the 70th.

The chants from the AK-Rowdies continued, and they may have helped, as Junior captain Adam Najem rose above his marker and met a lobbed cross with his head, emphaticallly sending the shot past Froscheur. Najem displayed his leaping ability again as he soared into the student section immediately following the goal. In the 76th, the Zips evened the score at 3-3.

Akron nearly got the game-winner when Sepe narrowly missed the top of the net.

The game would go into extra time, where the Zips would send off 7 shots, compared to Ohio  State’s 2. Both Ohio State shots were on goal however, and Fenlason notched two of his six saves in overtime. Akron notched 3 shots on goal in both overtime periods.

Akron earned a corner kick with less than 10 seconds left, and with seven seconds remaining the corner was lifted off, but the ensuing Akron chance was cleared away, and the ball rolled safely out of bounds as the buzzer sounded.

Akron finishes the home stand on Tuesday, September 22nd, as they take on Wake Forest.