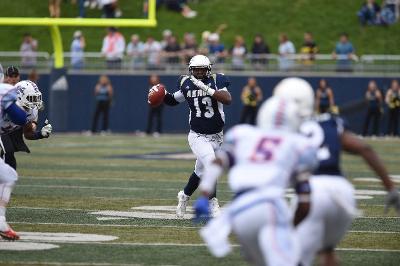 Despite a rocky start, the Zips dominated the Savannah State Tigers 52-9 on Saturday at InfoCision Stadium.

Coming in at 0-2 following tough games versus Oklahoma and Pittsburgh, it seemed like the Zips would be able to walk over Savannah State, a team that had lost its previous 22 ball games.  However, some key first half mistakes hindered those expectations.

First, with the Zips leading 7-0 off of a Cody Grice touchdown run, quarterback Tra’Von Chapman threw an interception to the Tigers Juwuan Tolbert, which was returned to the Akron 31 yard line. That led to a Javon Green 30 yard field goal, making the score 7-3 Zips.

On the following possession, Akron marched all the way down to the Tigers two yard line, thanks in large part to the running of Conor Hundley, who ran for 68 yards on 5 carries on the drive. However, the drive failed when Thomas Woodson’s first pass of the season was intercepted by Anthony Hunt in the end zone.

Following three punts, the Zips took the ball down to the opponent’s 19 yard line off of a 28 yard Donnell Alexander run, and the Zips were forced to kick a field goal. But the Tiger’s Marquis Smith blocked Robert Stein’s attempt and Tolbert picked it up and took it 81 yards for a touchdown.

Following a failed two point conversion, the Tigers led 9-7, with over nine minutes remaining in the half. And it was all Akron from there.

On the following possession Woodson entered the game to start the drive for the first time and completed four of five passes for 57 yards, while also rushing for 11 yards, which led to another Grice touchdown run.

Following a Savannah State three and out, Akron started from the Tiger’s 46 yard line. With Woodson still in the game, the Zips took it all the way down to the four yard line. On third and goal from the four, the 275-pound Grice took a direct snap and pounded his way into the end zone for his third score of the ball game. Akron’s lead was 21-9 with 1:11 to go in the half. But the Zips weren’t done there.

After another Savannah State three and out, Akron got the ball from their own 39 yard line with thirty seven seconds to go. Hundley got it started with a 17 yard run to the Tiger’s 44, and then a pass interference penalty took the ball to the 33 yard line. On the next play, Woodson delivered a strike down the middle of the field to senior wide receiver Imani Davis to push the lead to 28-9 with five seconds remaining in the half. It was their first passing touchdown of the season. The Zips outgained Savannah State 347 to 84 in the first half.

The second half went smoothly for the Zips. Following DeAndre Scott’s second interception of the season, kicker Robert Stein made it 31-9 halfway through the third period. On their next drive Woodson found sophomore Jerome Lane for a 40 yard catch, which was followed by Hundley runs of 12 and 18, the second of which crossing the goal line to extend the Zips lead to 38-9.

Akron would take the lead to the fourth quarter, where they also got a one-yard touchdown run by Woodson and a late 50 yard touchdown catch and run by Lane, on a pass by Chapman, who reentered for the last three Zips drives.

The Zips finally got going offensively against the Tiger’s on Saturday. Conor Hundley led the way with 120 yards on just 11 carries with the one score. He also caught 3 passes for 30 yards. Donnell Alexander also ran well, with 78 yards on 11 totes. At quarterback, Thomas Woodson took advantage of his first real playing time of the season, completing 12 of 20 passes for 207 with a touchdown and an interception, while also rushing for 63 yards on 11 carries for an additional score. The starter, Tra’Von Chapman finished with 128 yards passing with a touchdown and interception also. He completed 6 of his 13 passes while rushing 7 times for 12 yards. The Zips had a balanced receiving day, with Jerome Lane (3 receptions, 99 yards, 1 touchdown), Anthony Young (2 catches for 81 yards), and Imani Davis (3 receptions for 50 yards and a touchdown) taking the bulk of the work.

The Zips will look to get to .500 when they travel to Louisiana this Saturday at 6 p.m.