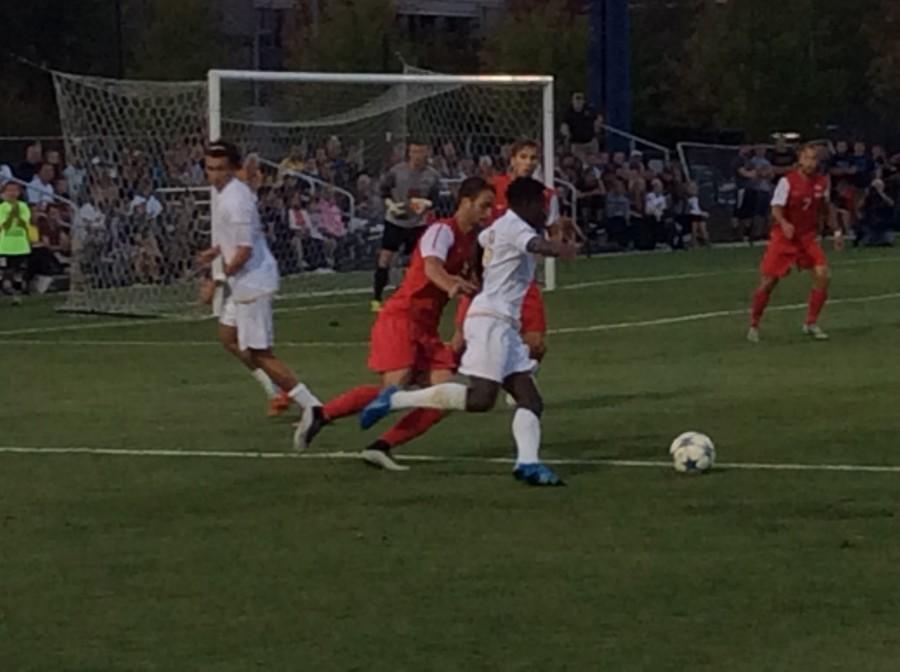 Richie Laryea looks to shoot against the Buckeyes

The University of Akron men’s soccer team heads back out to the pitch tonight to take on Wake Forest at 7 p.m. at FirstEnergy Stadium – Cub Cadet Field.

The Zips (4-1-1) enjoyed a six break from game action after having to play four games in the previous 12 days, the last being a 3-3 deadlock with The Ohio State Buckeyes.

That game against the Buckeyes was the only one of the four in which Akron was not facing a ranked team, after matches against Georgetown, Maryland, and Saint Louis (all victories).

Akron’s strong showing in those games propelled them to the No. 11 ranking in the last poll put out by the National Soccer Coaches Association of America (NSCAA) released on September 15.

Tonight’s game will test the Zips as they take on the Demon Deacons (6-1), who were ranked No. 7 in the same NSCAA poll.

The newest rankings will be released later today and will end up reflecting the Zips tie against Ohio State and the Wake Forest loss to No. 18 Elon and a victory against unranked ACC foe, Syracuse.

Leading the Zips so far this season in scoring have been Sam Gainford with 11 points (4 goals, 3 assists) and Adam Najem with 10 points (4 goals, 2 assists). Richie Laryea is not far behind with seven points on two goals and three assists.

Minding the net is goalkeeper Jake Fenlason who has made 24 saves in his six games this year. Fenlason has a 2.03 goals against average (GAA) so far this season.

Leading the Demon Deacons in scoring is Michael Gamble with 11 points (5 goals, 1 assist) followed by Jack Harrison with eight points on two goals and four assists.

The Zips have taken 95 shots overall and 40 shots have been on goal in their six games, so Wake’s netminder should be tested.

This is only the Demon Deacons second game on the road and will be a test for them in front more than 3,000 fans. The AK-Rowdies will be sure to pack the areas around the playing surface, making the environment unfriendly for the visitors.