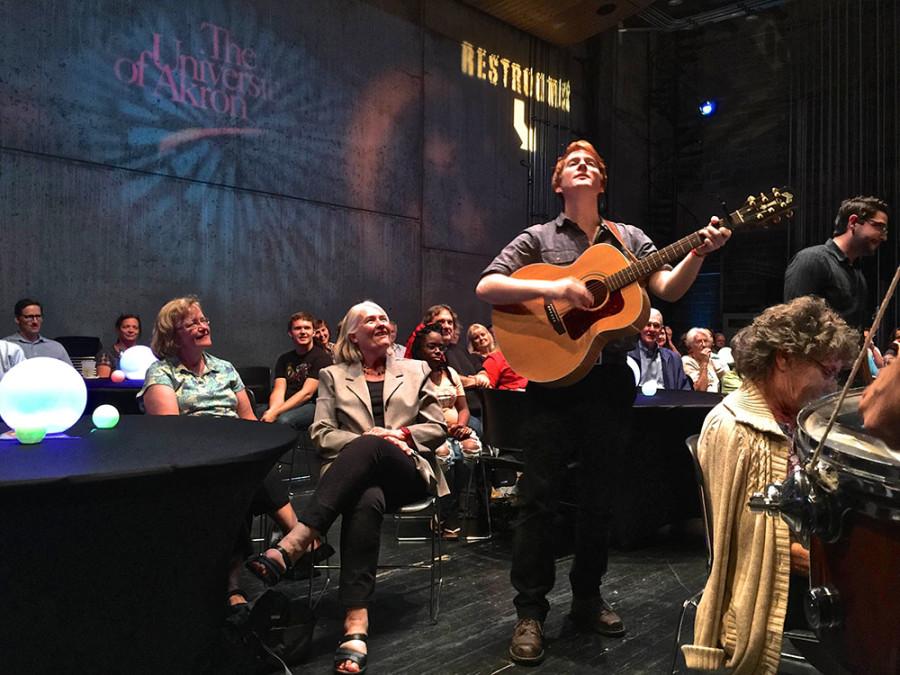 In spite of a lukewarm audience, PigPen Theatre Co. instantly brought life to E.J. Thomas’s Stage Door when they stepped on stage on Wednesday, Sept. 16.

The band’s unique sound, humor, and smooth transitions from instrument to instrument, often mid-song, captured the audience’s attention almost immediately when they played “Choir,” from their album “Whole Sun.”

The acoustic portion of the show was a crowd favorite.

Junior Shannon Gaspar said “the coolest part was the acoustic thing.” She joked that she now knows what an accordion sounds like.

According to junior Eric Aho, UA students in attendance credit their knowledge of Wednesday’s event to an ad for PigPen Theatre Co. at a recent Residence Hall Program Board 9:09 event.

The band previewed their new song “Let Me Go” live for the first time.

Receiving positive feedback from the crowd, the band asked for suggestions for what it should do with its limited time in Akron.

There was almost a unanimous audience response that the band must stop at Luigi’s before they depart. The band then joked that they better wrap up the show so they could make it to the restaurant before it closed for the night.

“This was my first back-stage show and I definitely liked the modern bluegrass feel they had,” freshman Ryan Aho said.

Eric Aho said that he was a fan of E.J.’s stage door shows and that he’d go again, especially if they came around again, and he planned on looking them up when he got home.

But Aho’s hopes might be in vain. E.J. Thomas’s future is unclear, as it was a major recipient of the UA administration’s summer cuts. University officials have said all contracted shows will go on this year, but nothing is set for next year.

The firing of E.J.’s staff has been one of the most contentious issues for the UA community, yielding backlash from students, faculty, and alumni alike.

PigPen Theatre Co.’s album “Bremen” won the No. 10 spot on the Huffington Post’s 2012 Grammy Preview. The band performed at Mumford and Sons, Gentlemen of the Road Festival, appeared on the MTV Awards recently, and will be making their film debut in Jonathan Demme’s Ricki and the Flash starring Meryl Streep.

PigPen Theatre Co.’s albums are on iTunes, Google Play Music, and Spotify. The band also has an upcoming show at Nighttown in Cleveland on Oct. 12.