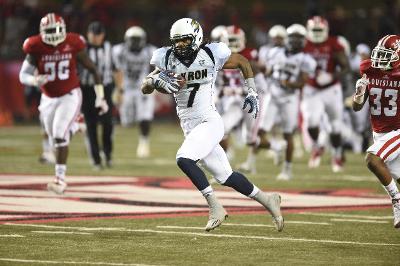 Jerome Lanes heads towards the endzone

Sophomore Thomas Woodson passed for 238 yards in the air and ran for 93 more yards on the ground and three touchdowns total to propel the Zips to a 35-14 victory at Louisiana.

With the victory, Akron earned the 500th win of the history of the program.

For the offense, ‘balance’ was the key word as nine different receivers caught a pass from Woodson, while Conor Hundley powered his way through Louisiana for 77 yards on 20 carries, including a pair of touchdowns.

Defensively, Akron forced four turnovers and held a potent Ragin’ Cajun offense to 112 yards on the ground and 173 through the air. Louisiana came into the game averaging over 300 yards rushing and over 500 yards a game in total offense before the Zips defense smothered them.

Woodson gave Akron the momentum early by hitting wide out Andrew Pratt for the touchdown on a slant pattern, his first of the season, with 7:10 remaining in the first quarter. The drive covered nine plays for 81 yards over 3:37.

Early in the second, Woodson took matters into his own hands and scored on a 14-yard quarterback draw just six seconds in. Unsportsmanlike conduct and pass interference penalties against Louisiana helped the drive.

Louisiana cut the deficit to 14-7 and were poised to tie the game with just a little over two minutes to play in the half, but the Zips defense held on to a fourth-and-one to keep the Cajuns out of the end zone.

The Ragin’ Cajuns, looking to build on the momentum that might have ended the half, were met by a hungry defense not wanting to surrender. DeAndre Scott intercepted a Brooks Haack pass at the Akron 18 to stop another drive.

Fueled by a Woodson 38-yard run, the Zips raced down the field and pushed the lead to 21-7 after Hundley plunged in from a yard out.

The defense held again, and Woodson along with receiver Jerome Lane combined on a 72-yard completion on the first play to put the Ragin’ Cajuns down 28-7.

Hundley registered his second rushing touchdown with an 11-yard push into the end zone to give the Zips a 35-7 lead with 10:08 left in the game.

Akron returns to action on Saturday, Oct. 3, for its Mid-American Conference opener and Homecoming contest versus Ohio. Kickoff at InfoCision Stadium – Summa Field is set for 2 p.m.