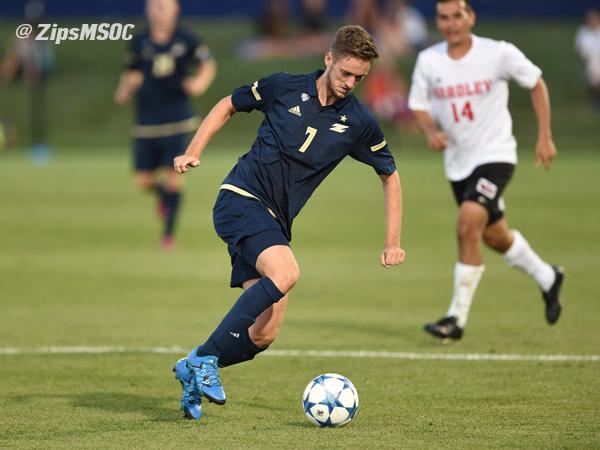 The victory marks the third straight for the Zips (5-2-1) on the road over a ranked opponent after Akron edged No. 4 Georgetown (Sept. 4) and No. 6 Maryland (Sept. 7).

The Zips outshot the Gauchos for the match, 13-6, including 9-1 on goal. Gainford and junior Adam Najem led the Akron offensive attack, recording a game-high three shots apiece. Sophomores Richie Laryea and Nate Shultz added two shots of their own.

Senior goalkeeper Jake Fenlason stopped the lone shot on goal he faced for Akron and collected his second shutout of the season.

Towards the end of the first half, in the 35th minute, Gainford redirected the deflection off of Gauchos’ goalie Justin Vom Steeg from his own shot to find the back of the net for his team-leading fifth goal of the season.

Holthusen capped the scoring of the match by extending the Zips’ lead to 2-0 in the 87th minute. He intercepted a UC Santa Barbara pass in the offensive end and found the back of the net in scoring his first goal of the season.

Akron returns to action on Wednesday as the Zips host No. 21 Penn State at FirstEnergy Stadium – Cub Cadet Field. Game time is set for 7 p.m. It is Staff and Faculty Appreciation Day at the game and also the second trading card giveaway. As always, Zips students get in free with their Zip Card.