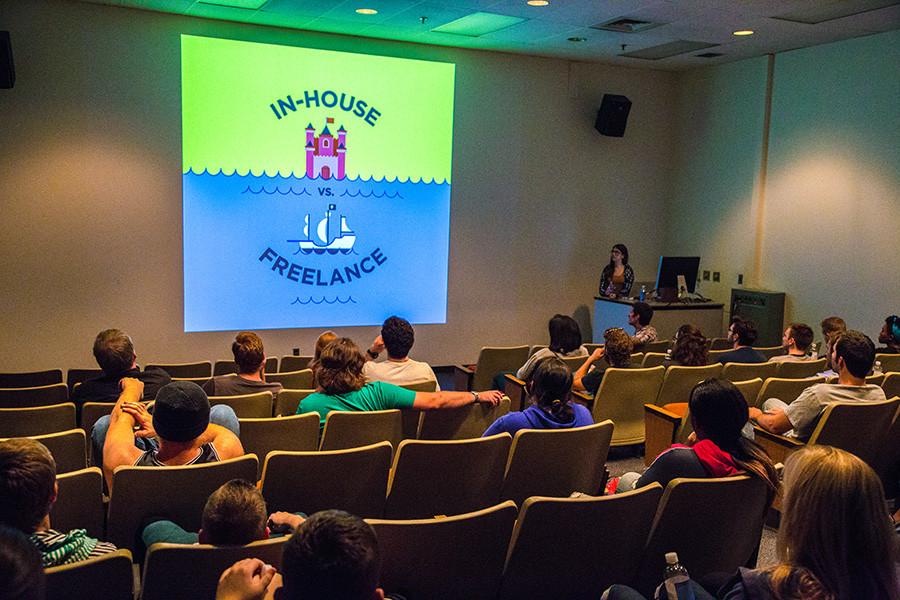 Cadieux gave her “ultimate advice” to those confused and intimidated by different forms of motion design.

“Just try it. There’s so much you can do and that can be really intimidating and that’s why I avoided 3D for a really long time. But really you should just try it and get the program, especially if you’re a student because it’s way more accessible,” Cadieux said.

She then laid out some of the pros and cons of in-house and freelance design work.

“When you’re working in-house it’s great because you’re in a group of people. They’re all really talented and willing to help you,” she said.

Cadieux spoke about her personal experience. She stated that it allowed her to make connections, who would then later contact her for additional projects.

“Freelance right out of the gate is terrifying,” Cadieux said. Yet, as a benefit of freelance, “you just don’t schedule work for when you want to be off, and just make sure you have enough money. That can be difficult, but the option is there.”

Cadieux informed the audience of the Twitter hashtag, #mochat, which is most active on Tuesday nights at 9 p.m. for an hour. It allows people to talk about motion.

“Twitter is a big deal for motion people. They’re all on there and very accessible. A lot of really amazing and talented people hang out on there and dispense advice,” she said.

Cadieux also suggested hashtagmotiondesign.com, a helpful website to chat with others working in motion design. It is especially helpful to those working alone in freelance when they may need help on a project.

Samples of Cadieux’s animations can be seen on her website: www.caitcadieux.com.