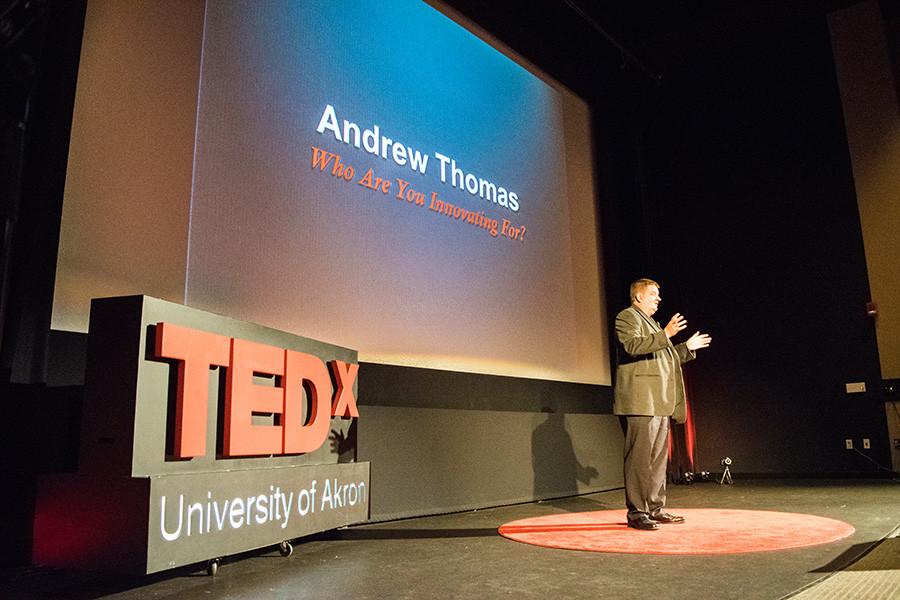 “There’s nothing anyone in the world can do that we can’t do in Akron,” Jeff Hoffman said.

On Sept. 29, the SU Theatre held its second sold out “TEDxUniversityofAkron” talk with the 2015 theme, “Breaking the Mold.”

Hoffman was the Master of Ceremonies for the event and gave anecdotes about what breaking the mold means.

TED Talks are globally recognized speeches that embrace a range of topics. TED stands for ‘Technology, Entertainment, and Design.” The ‘X’ stands for ‘independently organized,’ and allows these talks to be held in various communities.

Following this year’s theme, the event allowed eight influential speakers the chance to share their powerful messages with the audience.

This idea of breaking the mold represents how these individuals stand out and have made a difference in society.

“Are we here to break the mold? No, we’re here to shatter it,” Hoffman said.

Barton’s talk revolved around the exploration of life and death, Hexter discussed the success of Dichotomy, Bastien spoke about cultivating hope in Haiti, and Kennedy spoke about Biomimicry. Khrone addressed the idea of ‘what if’, Pilcavage talked about how stories can save lives, Thomas lectured about whom innovation is really for, and Haslinger expressed the concept of the power of escape.

Bastien’s talk was a crowd favorite.

“I liked Hugues. It didn’t seem very scripted and it sounded like he was really passionate about what he was doing. It was cool being able to see the progression of the first school to how big the school now,” UA student Zach Kisor said.

Bastien shared his heartwarming and powerful story about helping his native village in Haiti.

He emigrated to the U.S. while he was still a teenager and later received a bachelor’s in engineering.

“It would have seemed like I achieved the proverbial ticket to success,” Bastien said.

While he was grateful to be able to earn a degree and come to America, he felt a strong need to help those who could not have the opportunities like he had.

Wanting to give Haitians a chance to learn, he opened a school for kindergartners in 1994. The original class had 84 kids enrolled. After 21 years, the school now houses more than 2,400 children and the students exceed in all national examinations.

Bastien boasted about the success of a UA graduate student who was in the original 1994 class in Haiti.

Bastien expanded his selflessness and opened a multitude of businesses, a medical clinic, and a working agricultural farm.

The medical clinic serves more than 150,000 people in the community and has created numerous  jobs for Haitians.

He has dedicated his life to helping his home village. He wants the community to have a sense of hope as well as to “bring hope to a new generation.”

This was just one of the many powerful and touching stories that were presented throughout the event.

“I think, overall, the event was a success. Our goal was to fill up the Student Union theater with students and Akron community members and bring eight speakers together with the hopes of ultimately triggering critical thinking within everyone in the room. The main purpose of the event was to make people think,” TEDxUniversityofAkron President Kyle Flynn said.

The TEDxUniversityofAkron event was conceptualized by a UA undergraduate student team, who then received a one million dollar gift from the J.M. Smucker Company. The John S. and James L. Knight Foundation also donated a $10,000 gift to allow an expanded license.

For more information and to watch the talks visit http://bit.ly/1FJaTyg.