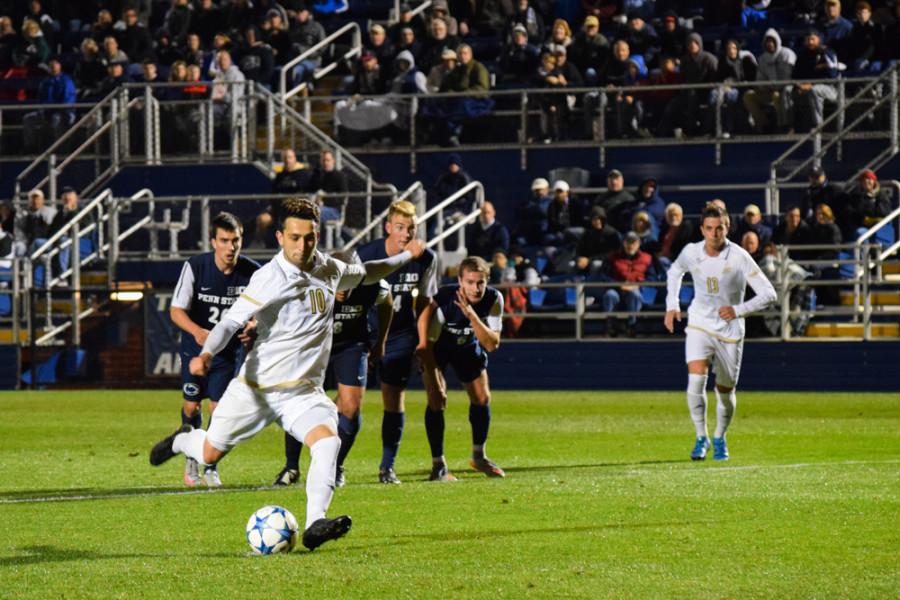 Adam Najem scores a goal during a penalty kick in 2nd half against Penn St.

The University of Akron’s men’s soccer team played another close game last night but were able to come out on top, 1-0, over Penn State at FirstEnergy Stadium – Cub Cadet Field.

Adam Najem scored on a penalty kick in the 77th minute to secure the Zips, who are ranked ninth in the latest poll, sixth victory of the year. The goal was Najem’s fifth tally of the season.

The first half was dominated by Akron (6-2-1) on the field as they outshot the Nittany Lions 11-2, but it was even at 2 for shots on goal.

Jake Fenlason made three saves on the night, but none bigger than stopping Penn State’s Robby Sagel’s header in the 85th minute to lock up his third shutout of the season.

In the 87th minute, another Penn State (4-3-2) chance was blocked by a defender.

For the night, the Zips outshot Penn State 24-6, and ended up with a 5-3 shots on goal advantage. Akron also had six corner kicks to the Nittany Lions’ three.

Akron’s Richie Laryea and Sam Gainford kept the pressure on the opposing goalkeeper with six and five shots respectfully.

The Zips next game is Saturday as they travel down to University of Alabama-Birmingham to take on the Blazers. They return home next Tuesday to take on Santa Clara.