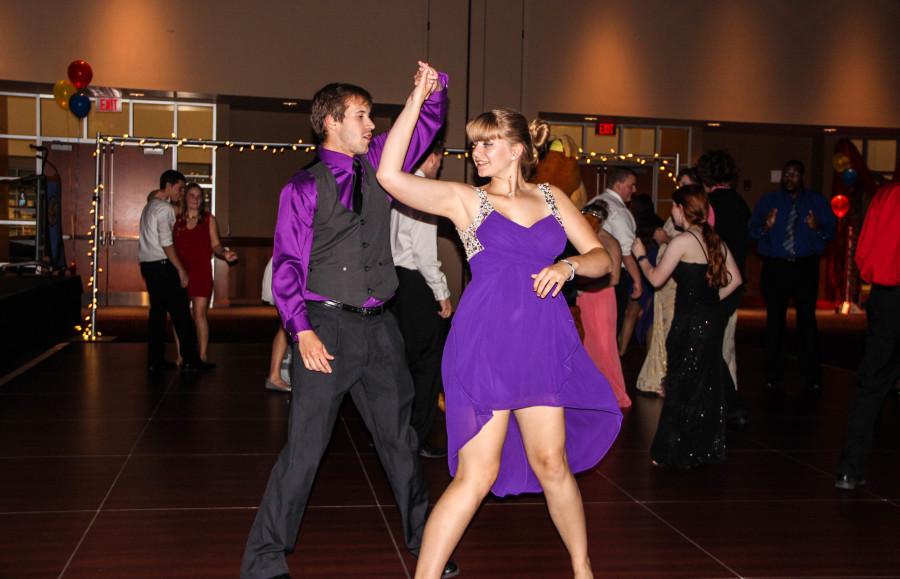 Patrick Keenan and Shianne Cunningham dance together amongst other students on the dance floor.

The Student Union ballrooms transformed from an average gathering space into a vintage circus-themed extravaganza this past Friday night.

Kylee Siefke and the other members of the Zips Programming Network have been planning UA’s homecoming dance since this summer.

Siefke is the traditional chair for ZPN, which leaves her in charge of events considered “traditional,” such as the homecoming dance and week events, Mocktails, Alcohol Awareness Week, and Akron’s Got Talent.

“My goal was to keep it classy and not cheesy or corny,” Siefke said. ZPN served food such as funnel cake fries and strawberry shortcake to help carry the vintage carnival theme.

ZPN covered the ballrooms with hand-made decorations made from tulle, string lights, vintage popcorn boxes, and more to create the vintage circus feel.

“The moment the king and queen were revealed is always really exciting and just getting to see all of the court at the event is really great,” she said.

Fifteen active students were nominated by their respective organizations for homecoming royalty this year. Amanda Pinherio and Erik “Cheeto” Zito-King were crowned UA’s 2015-2016 king and queen.

The king and queen were presented at UA’s football game against the Ohio Bobcats on Saturday afternoon.

Siefke said that even though there was a lack of support this year from students in relation the student organizations being represented on homecoming court, they received higher attendance from students who had no organizational relations.