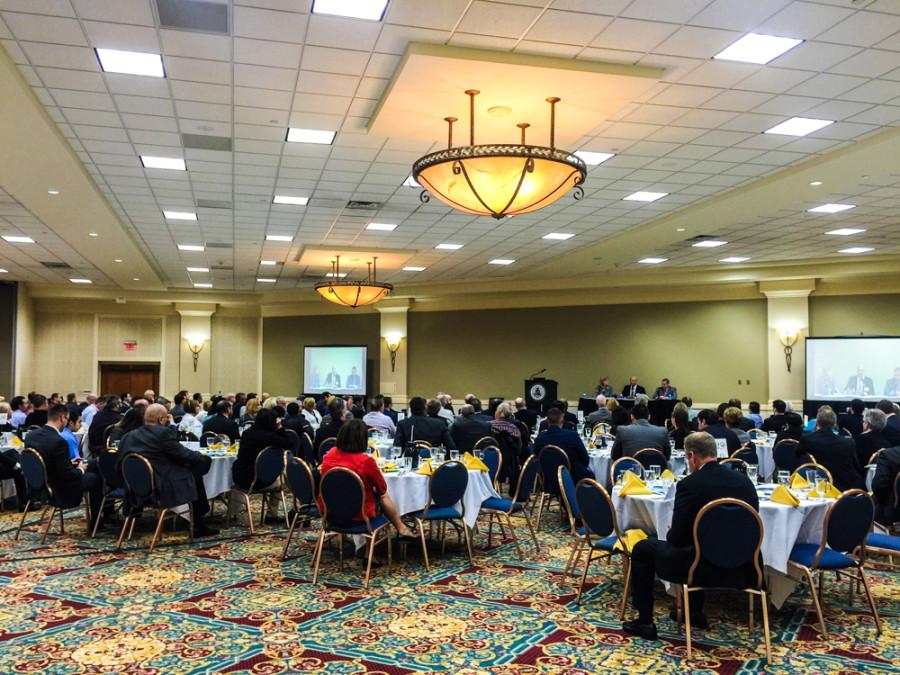 This year’s summit theme was “The Economy 2016: ‘The Election and its Monetary Impact.’”

Burns praised UA alumni and noted in his remarks that he was highly impressed with the University’s graduates.

Sturiale, a UA alum, is the senior vice president at Charles Schwab. Tousley is the managing director at Goldman Sachs.

Sturiale addressed both the business professionals in the room and the students, who he referred to as the “millennial class.”

The struggle of student debt was not ignored. Referring to millennials, “They’re also heavy in debt load, about $30,000,” Sturiale said.

“It’s going to take [millennials] longer to get to the annual average income in the United States, which is $42,000,” Sturiale said. “That’s where we see a lot of these individuals after they graduate from college, coming back in to live with their parents, and I am one of those who can attest to that.”

Sturiale stressed that Charles Schwab and other companies need to make an effort to learn how to better relate to technology-driven, millennial clients.

Sturiale and Tousley both were in agreement on the topic of market volatility. Volatility is the degree of fluctuation of trading prices over time.

“As investors, we think about planning… you always have to be planning for things that you don’t expect, things that should not happen,” Tousley said. He related those unexpected situations to the recent floods in South Carolina.

Preparing for unexpected events can lead to steadier markets. When it comes to the United States’ market, Tousley described America’s market growth as “steady—complex, but steady.”

As for the 2016 elections, Tousley briefly spoke about the market and its correlation to election years and political parties.

“The only thing that is statistically significant, is the markets are a little choppy before the election and then you have the ‘glad it’s over’ rally after the election, because you have clarity,” Tousley said.

Tousley highly advises clients to separate their financial investments from their political affiliations and opinions.

Justin Brown, a nursing student in his third year at UA, found the economic summit beneficial.

“It was a great networking opportunity, and it was fun to more deeply consider the impact of the global economy and changes in demographics and business strategies on my life in the present and future,” Brown said.

The summit was wrapped up with a question and answer session from the two panelists and moderator and closing remarks from James Thomson, a UA professor of finance.