First half barrage carries Zips to victory over EMU 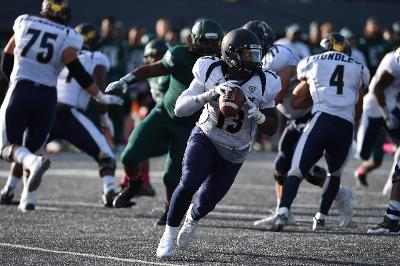 The University of Akron football team traveled to Ypsilanti, Michigan on Saturday and coasted to a 47-21 win over Eastern Michigan University.

Akron won on the road for the second straight time and improved to 3-3 overall (1-1 in Mid-American Conference play), while the Eagles fell to 1-5 overall (0-2 MAC).

Quarterback Thomas Woodson completed 14 passes in 20 attempts for 222 yards and a career-high four touchdowns. He also added 72 yards on the ground.

The Akron team racked up over 500 yards in total offense with most of it happening in the first half while stockpiling 40 points.

Receiver Jerome Lane earned his first collegiate 100-yard receiving day by hauling in four passes for 104 yards. Two of his catches were for scores.

Conor Hundley rushed for 119 yards on 17 carries and added two touchdowns of his own.

The first quarter was a good start for the Zips. On their second possession of the day, Woodson drove the team 60 yards on eight plays and finally connected with Imani Davis on a nine-yard pass to give Akron the 7-0 lead.

After the ensuing kickoff, Eastern fumbled the ball and it was recovered by Austin Wolf. Woodson found Lane on a 22-yard pass play just 50 seconds later and gave the Zips a 14-0 advantage.

EMU found its way to the end zone before the end of the first quarter to cut the deficit to 14-7 as Brogan Roback found Austin Stone on a seven yard pass.

The teams traded touchdowns to start the second quarter, as Akron scored when Woodson connected with Lane once again from 39 yards out.

Hundley got into the scoring column next and his 29-yard jaunt into the end zone gave the Zips at 28-14 lead with 7:55 left before the half.

After the defense held on a quick three-and-out, special teams got into the act and blocked a punt that Buffalo recovered in the end zone, which resulted in a safety from a tackle made by Andrew Hauser. Seven minutes and 24 seconds were left in the quarter at this point.

The Zips added a Robert Stein 34-yard field goal; and after the Guiser interception, tight end Josh McNeil got his first collegiate touchdown on a one-yard pass from Woodson. Akron went into the locker room with a comfortable 40-14 lead.

Hundley added his second score of the day on the first possession of the second half to extend the lead to 47-14. Akron cruised home the rest of the way.

Akron heads back out on the road again next week to take on the Bowling Green State University Falcons at 3 p.m. on Saturday.