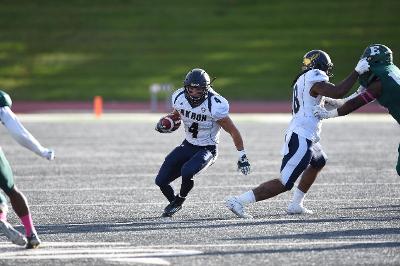 The University of Akron football team looks to extend its winning streak to two as it hits the road again to take on the Falcons of Bowling Green.

Akron goes into this game with plenty of offensive momentum after racking up over 500 yards against Eastern Michigan and posting 40 first half points.

The Zips (3-1, 1-1 MAC) cannot rest on the laurels of last week’s game because they are facing a BG team that has a 2-0 record this year against the Big 10 Conference.

Last year, the Zips offense out-gained Bowling Green, gaining 398 yards of total offense, but the turnover bug bit Akron to the tune of five giveaways as the Zips dropped a 27-10 decision to the Falcons at InfoCision Stadium – Summa Field.

It will not be easy to beat the 2015 edition of the Falcons (4-2, 2-0 MAC), who was voted on by the coaches to win the East Division of the Mid-American Conference. The Zips were predicted to finish in second place behind BG.

In six games for the Falcons, quarterback Matt Johnson is 190-of-275 for 2,534 yards and 19 touchdowns with his favorite receiver being Roger Lewis who has 48 catches for 902 yards and seven touchdowns. Travis Greene leads the rushers with 473 yards and four touchdowns.

On the Zips’ side of the ball, quarterback Thomas Woodson leads the Zips with 57-of-110 for 898 yards and seven touchdowns. Imani Davis is the top receiver with 19 catches for 293 yards and two touchdowns, and tailback Conor Hundley is the team’s leading rusher with 474 yards and six touchdowns.

This will be the 22nd meeting between Akron and Bowling Green in series history, which started in 1941. The Falcons lead, 14-7. In MAC games only (since 1992), BGSU leads, 13-5. Bowling Green has won the last six outings against the Zips.

If Akron’s offense can perform like it has when it’s clicking on all cylinders, the scoreboard operator could be a busy man this Saturday as these two offenses could generate a bunch of points.

In the end, as it is usually in games like this, it will probably be a defensive play at the end that give the victors the game.