Students will not be silenced

Protesters interrupt Board of Trustees meeting 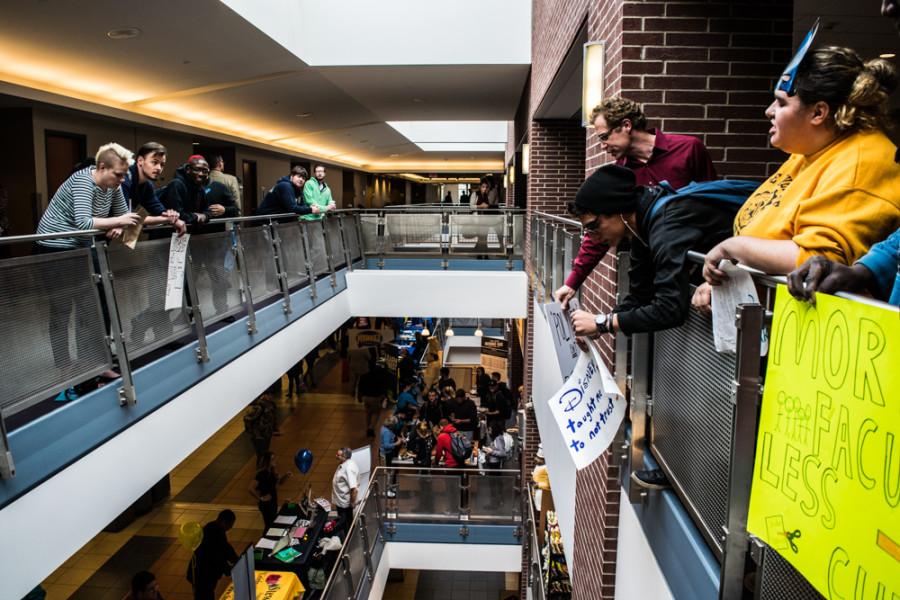 Protesters attempt to attract attention of people on second floor of the Student Union.

By Logan Lane and Kristina Aiad-Toss

“[We] will not be silenced!” protesters shouted at the Board of Trustees meeting on Wednesday morning in the Student Union, where nearly a hundred UA students, alumni, and faculty gathered to voice disapproval over recent changes.

“Students should have a voice that matters, just as faculty should,” said UA graduate student Tom Guarino, one of the protest organizers, “and that hasn’t happened under this administration.”

The protest, run by social media groups such as Graduates over Greed, Olive Jar, and Save the University of Akron from Scott Scarborough, gathered to criticize the elimination of the baseball team, the defunding of the UA Press and E.J. Thomas Hall, staff eliminations, and recent discussions of rebranding.

“We don’t think that [Scarborough] has our best interests in mind with the decisions that he has made,” Watson said. “Our number one goal is to ask Scarborough to either resign from his position or for the Board of Trustees to release him from his position.”

Several faculty members, alumni, and students spoke to the protesters before the meeting began.

Kevin Kern, a professor in the history department, questioned the administration’s ability to represent its faculty and students. He noted that faculty voted three to one against the rebranding, and that student polls showed students were strongly opposed to the measure.

“So if he is not speaking for the faculty, alumni, or students, then who is he speaking for?” he said.

“I think that one of the big problems is that Scarborough and [the Board] have failed to listen to faculty,” said Donna Webb, professor emeritus at the Myers School of Art. “We have the faculty senate, [and] we have the AAUP, which is made up of elected people from the faculty.”

William Williams, adjunct professor of English, participated in the protest.

“I’m here to protest… to get [the Trustees] to understand that the way this university is going, it’s going straight down the tubes.” He went on to stress that the university “is not a business,” and that its responsibility is to educate, not sell a product.

After a three-hour long executive session, the meeting opened to the public at 11:10 a.m. The protest followed.

“If you care about student success and retention, why are we not hiring more full-time tenure-track faculty?” shouted senior anthropology student Love Gwaltney.

Shortly after, Thomas Guarino demanded to know which other major budgetary decisions approved by the board had not been “line-item detailed,” referring to budget details that the board did not scrutinize. “If they’re not looking, who is?” he said afterward.

Both students were escorted out.

When the meeting was officially concluded, several students stood firing questions and comments at Scarborough and board members.

Junior Feather Weldon pressed board members on comments made during the meeting by Ted Curtis, vice president of Capital Planning, wherein he referred to students as “customers.”

“Why are we paying for your $450,000 base salary when you won’t even answer difficult questions from students?” a student asked.

“Why do you think it’s acceptable to fire 200-plus staff from the university and then hire your administrators from Toledo with higher pay?” another student asked.

No questions were answered.

Darnell Davis, one of two UA student trustees, gave his opinion on the protest, saying, “Well I think that student advocacy is a good thing, but they have to make sure they have the facts. I think [students] have to do more fact-finding and make sure the stuff they are saying is true.”

UA spokesman Wayne Hill said the University had no comment on the protest or the Board meeting.