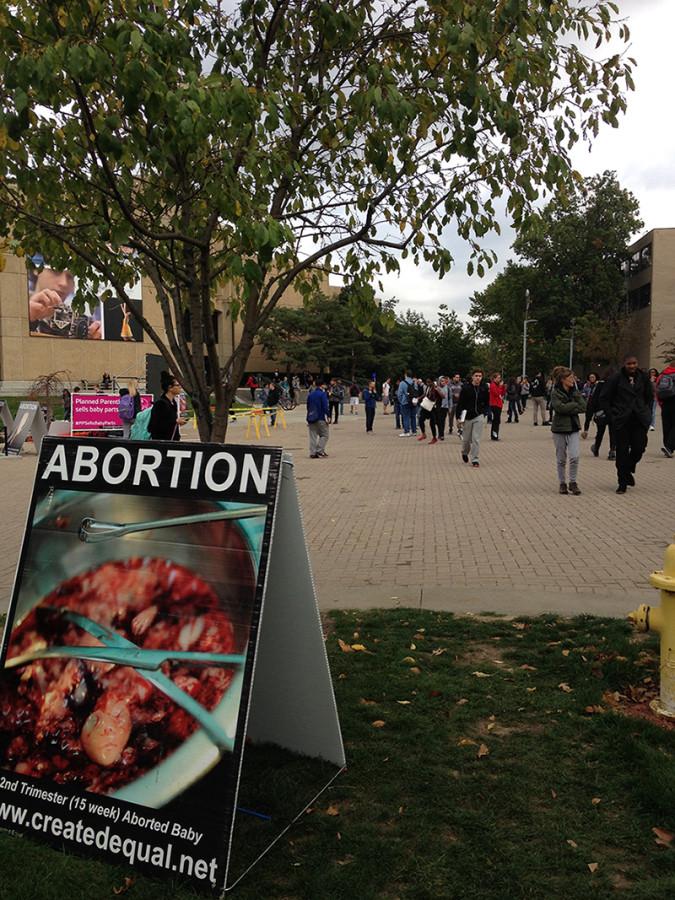 “We’ve had people destroy or try to destroy our signs; we’ve had people try to steal them,” said Mark Harrington, national director of Columbus-based Created Equal. “We had like five different attacks [on signs today]. We don’t usually get that hostility.”

Harrington said the group of 15 campaigners—some students from other universities, some Created Equal staff members—travels around the country visiting large college campuses and doing advocacy work, with a specific focus on the Midwest in the fall. The group has already been to other Ohio schools like Ohio State and Columbus State, and is traveling to Bowling Green tomorrow.

The poster pictures were graphic, usually showing up-close images of what were apparently hands, feet, heads, and other body parts of aborted embryos and fetuses, sometimes with a coin in the background to depict their proportions. Cut off by caution tape, a large mobile video screen stood facing the Buchtel statue, playing videos of what is purported to be Planned Parenthood members tampering with abortion body parts.

The pictures came from Created Equal’s website, which has its own photographer and “abortionist,” according to Harrington, who said people often bring up the question of authenticity and bias regarding them.

Some students took issue with the group, its opinions, and the artifacts it brought to campus.

“[The problem] is just the fact that they are all men, who think their opinions matter over women, when really they are irrelevant to the situation,” Jade Reynolds, a Norton High School PSEO student said. Katie Deeken, her friend and fellow Norton student, agreed.

Though there were three females who were advocating for Created Equal, the majority were indeed males.

“I don’t agree with the artifacts. I’m older, but these are young girls and they are being affected emotionally and this is not the appropriate atmosphere,” said Lisa Henderson, a nontraditional UA social work student. “I saw a girl running around here knocking pictures over. This is not how you get your point across.”

UA student John Coyne said he “understands they have their right, but the imagery is a bit much, and it could have been done in a different way.”

Most of the advocates wore GoPro cameras for security reasons.

The UAPD were called in after, according to Harrington, some students began kicking, knocking over, or trying to steal signs. An officer standing near the scene said he was not allowed to comment.

In an emailed statement, UA spokesman Wayne Hill said, “As a public university, we make space available to groups wishing to express their First Amendment rights under the U.S. Constitution and state law, regardless of the point of view they may wish to express.”

Created Equal had been planning the UA visit for about a month, and first got in contact with Laura Miller-Francis, UA vice president of Finance and Adminitration. She sent them forms to fill out, which afterward were sent to five heads of constituent groups on campus for approval: general counsel, occupational health and safety, the physical facilities department, the police department, and capital planning. CFO Nathan Mortimer had the final approval, according to Miller-Francis.

“Whoever decided to OK this demonstration is irresponsible and not taking into consideration the women on campus who maybe have had abortions,” said UA senior Lia Pietrolungo. “People see this and suffer and are traumatized. And even the video has been proven to be false.”

“I think they are grossly taking advantage of a university,” Pietrolungo continued, “and it’s another black mark on [UA’s] reputation.”

According to Harrington, the demonstration organizer, Created Equal will be coming to UA every fall.