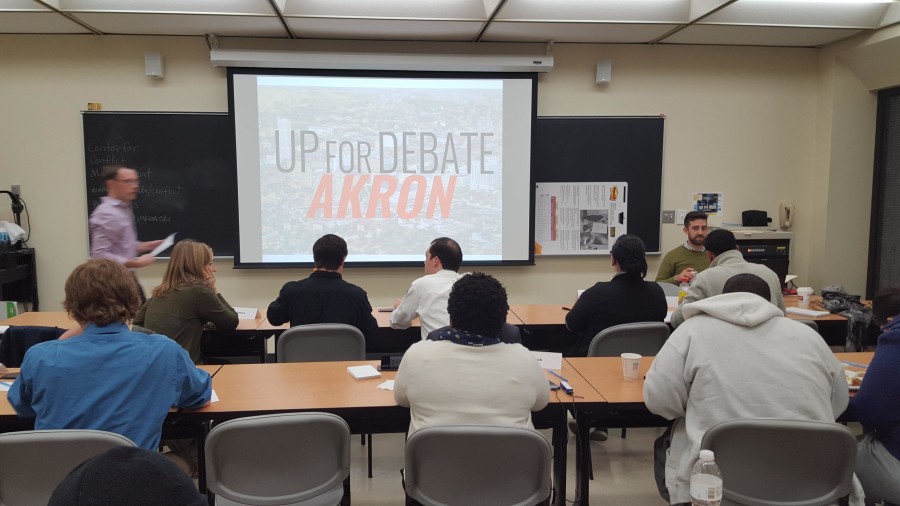 Students gathered in Olin hall for the “Up for Debate Ohio!” last Saturday.

The Jefferson Center, University of Akron professor Bill Lyons, and the Center for Conflict Management welcomed students to debate the current mayoral elections in an event called “Up for Debate Ohio!” in Olin Hall last Saturday morning.

The Jefferson Center is an organization dedicated to encourage people to vote and make democracy work for everyone. It works with communities to help educate the public on the importance of voting in order to strengthen democracy.

At the event, participants split up into groups and debated on issues like communication with and participation in local government, education, and how to make decisions when voting. Attendees were also allowed to speak up about their thoughts on voting locally.

Attendee Kenny Sanders, 31, said that voting is the foundation of America.

Mayoral Candidate Eddie Sipplen came to speak about how he plans to run the City of Akron if he became mayor. Sipplen talked about how he wanted to better Akron by investing and renewing the schools, neighborhoods, and downtown area.

Sipplen emphasized his plans to gather information on issues from the citizens, create a plan, and make a decision from there. He said he would have an open door policy as mayor and would speak to anyone if they have questions or concerns about the city.

“The event on Saturday was a good first step, bringing together a diverse group of young Akronites to discuss how they view local government and how they’d like to work with the City of Akron to strengthen the community,” said Andrew Rockway, Jefferson Center program manager.

UA student Brandyn Costa said, “This project in itself is exactly what we need because the lens in which the general public views politics is not appropriate to productive government.”

“We need to have more stake in the political process or else we won’t get involved, and this event is helping us with that,” Costa continued.

The Jefferson Center is currently working closely with Akron and its residents to get them more involved in voting locally. With the mayoral campaigns ongoing, the Jefferson Center hopes to educate and increase the number of millennials voting in this election.

“Your opinion means nothing if you don’t share it in a way it can actually be received,” Costa said.

Rockway said the Jefferson Center will build from this conversation to refine and implement some of the group’s recommendations.

The Jefferson Center plans on having more events soon to increase educated-voter numbers in Akron.