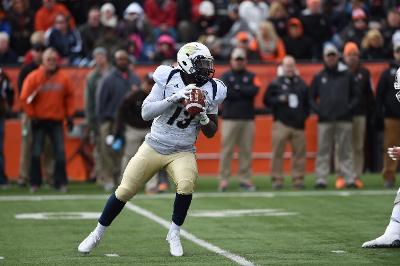 Bowling Green’s offense was ranked number one in the Mid-American Conference going into the game last Saturday against Akron (3-4, 1-2 MAC). The Falcons did not do anything to harm that ranking.

Akron quarterback Thomas Woodson completed 13 out of 28 passes for 91 yards and a touchdown. He added 54 ground yards in 13 attempts.

Running back Conor Hundley was the top rusher with 15 carries for 69 yards, and wide out Jerome Lane led all Zip receivers with four catches for 45 yards.

The Zips outgained the Falcons on the ground 167-120. The difference in the game was through the air, as BGSU outgained the Zips 412-104. The Falcons racked up 532 total yards of offense.

The game was close in the first quarter. The Falcons struck first by partially blocking a punt and took over on the Akron 48-yard line. Donovan Wilson scored from two yards out to give BGSU a 7-0 lead.

Akron answered back with a 10-play, 52-yard scoring drive of its own. Woodson found Tyrell Goodman on a 14-yard pass play to knot the score at seven with 1:52 left in the opening stanza.

After recovering a muffed kickoff, however, the Falcons scored another touchdown just nine seconds later to stretch their lead to 21-7,

Robert Stein added a 46-yard field goal to close the gap to 21-10 with more than 10 minutes before halftime, but the Zips were done scoring for the day.

Akron enjoys its bye week before returning home on Saturday, Oct. 31, for its Hall-ROO-ween game against Central Michigan University. Kickoff is set for 2 p.m.