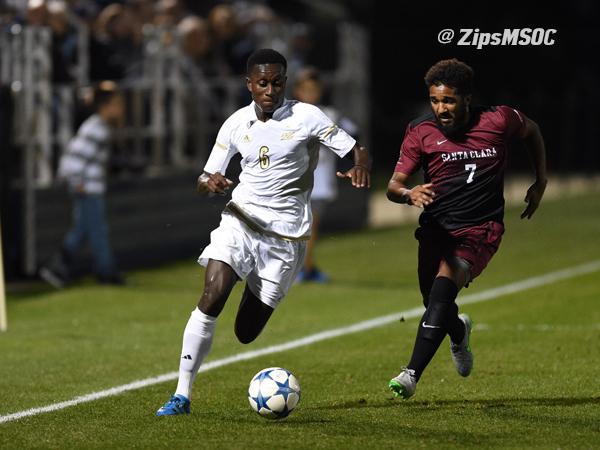 The Zips (10-2-1, 2-0 MAC) won for the sixth straight time while playing a season-high 23 players in the game at FirstEnergy Stadium – Cub Cadet Field.

Jake Fenlason recorded his fifth shutout of the season, stopping five Huskies’ (7-4-0, 1-1) shots during the match.

Laryea’s offensive outburst marks the first Zips hat trick since Adam Najem had one on Oct. 28, 2014, against Cleveland State University in a 5-0 win. Laryea’s feat is more remarkable because he only took three shots in the game.

Akron held a 21-12 advantage on shots over Northern Illinois, including 13-5 on goal. Six different Zips players recorded shots on goal, led by Sam Gainford’s four. Laryea and Najem each had three, while Souto, Robbie Dambrot, and Goncalo Soares each had two.

Laryea took advantage of the Zips’ offensive pressure by scoring his team-leading seventh goal of the year at the 32:58 mark. Soares had a shot on goal that was deflected by the Huskies’ Andrew Glaeser to the foot of Laryea, who blasted the ball into the back of the net. The assist was the first of Soares’ collegiate career.

Akron led 2-0 at the half, courtesy of a goal at 36:09 when a corner kick initialized by Gainford was cleared by the Huskies—but to a charging Souto, who beat Glaeser for the score.

Gainford was credited with the assist on Laryea’s second goal of the game at the 59:23 mark to give the Zips a 3-0 cushion.

Less than two minutes later, Laryea completed the hat trick, with assists going to Gainford and Soares, by scoring at the 61:02 mark to provide the final margin.

Akron returns to action on Wednesday, as the Zips welcome Michigan State University to FirstEnergy Stadium – Cub Cadet Field for a 7 p.m. match.