Whose ‘State of the University’ is correct? 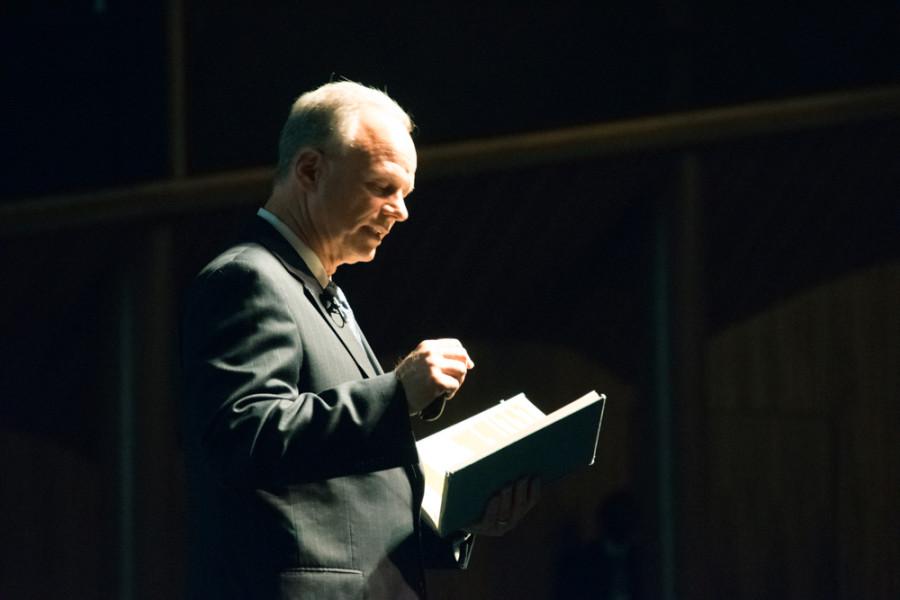 At his State of the University address, President Scott Scarborough read from retired UA professor George Knepper's book, 'Summit's Glory,' to illustrate how UA's financial troubles are nothing new.

By Grant Morgan and Kristina Aiad-Toss

UA President Scott Scarborough was not the only one to give his thoughts on the state of the university on Tuesday.

Faculty did, too. One hour before the president’s first “State of the University” address, around 80 UA educators in academic regalia and black armbands gathered outside E.J. Thomas Hall—the infamous symbol for recent University woes, in whose theater Scarborough spoke an hour later—for an AAUP-sponsored protest against not only Scarborough, but the UA Board of Trustees and other higher administrators.

Their version of the “State of the University,” written and passed out on letter-size flyers, contained a list of grievances, followed by a list of University strengths and ideas for “a way forward.”

Comparing this flyer with Scarborough’s actual speech reveals fundamental fissures between educators and administrators. Most pronounced is that over UA’s “Polytechnic” designation.

“There is no polytechnic wave in higher education. More universities have added lacrosse teams in the last 5 years than are re-branding as polytechs,” the AAUP flyer said.

Yet Scarborough, near the middle of his one-and-a-half hour presentation, spoke the opposite. One slide showed the logos of eight other schools who’ve embraced the “polytechnic name,” which drew chuckles from the crowd. He reinforced the familiar justification that UA needs to broaden its reach by becoming a national or international university, not just a regional one. “Polytechnic” is the means to do so, he says.

Such was Scarborough’s theme: that, besides a rebranding, the University must do more to stand out, citing demographic problems, effects of the recession, and changes in state funding as cause for its struggles. He also said the changes of the last few months were painful but necessary, and that the most difficult part was figuring out whether to draw them out slowly or “rip off the Band-Aid” by making them all at once—a move that he admitted causes indignation, but is better in the long-term. 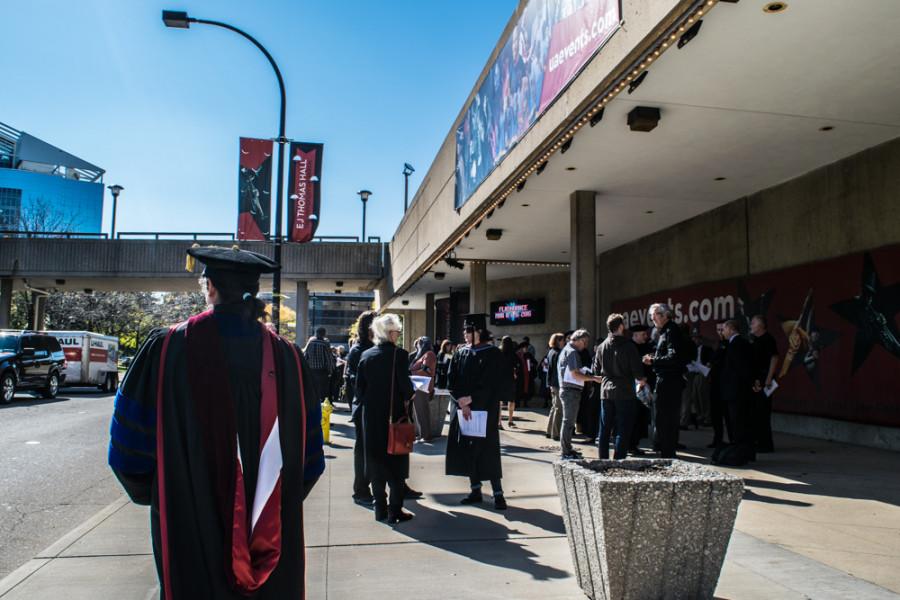 Yet those who protested before the speech tended not to feel much differently afterward.

Before the speech, John Zipp, UA sociology professor and president of the Akron chapter of the AAUP, said he did not know what Scarborough was going to say.

“I think the president made points today that he’s made in the past,” Zipp said afterward. “But I’d like to echo what he said at the end, that the success of these sorts of efforts”—referencing Scarborough’s numerous plans to improve UA’s renown—“depend on shared governance and teamwork.”

“An almost-negligible portion of the faculty believe we’ve had meaningful shared governance, and so it’s time to start doing that, and so we agree with the president [on that],” Zipp added.

Pamela Schulze, a professor in the department of Family and Consumers Sciences and secretary of the Akron AAUP, felt similarly. She said she did not expect any specific action to result from the protest, but hoped Scarborough would address faculty concerns in a situation that she says “now feels like an emergency.”

“…none of my concerns were resolved,” Schulze said in an emailed statement. “…The president seems to suggest that faculty resists all change simply because change is hard and frightening. That is simply not the case…to change as an institution, there must be buy in from important constituents like faculty, staff, and alumni.”

Schulze also said that since the AAUP’s survey results were released—which showed nearly three-fourths of UA faculty are not confident in Scarborough or the Board of Trustees—he has “never reached out to find out why we lack confidence in the administration or its initiatives.”

“There is almost no support for the changes that [Scarborough] has proposed,” Schulze added. “The president would do well to consider why that is…”

Scarborough played many videos during the presentation, including the new “Are You Out There?” campaign video, two videos of faculty and students praising the school, and two videos of LeBron James. The first was an apology for not being able to make it to the event, in which LeBron said he “has Scarborough’s back.” The second was a new commercial where LeBron pledges his support for UA.

About halfway through his speech, Scarborough brought up a slide called “Key University Initiatives,” which listed the dates and names of “initiatives” done in recent months.

Four initiatives, however, had no dates; Scarborough said they will be implemented in the next few months, but gave no details. They included: “Named Honors College,” “New Hub and Spoke Strategy,” “New International Strategy,” and “New Faculty Hiring Plan Phase II.”

UA spokesman Wayne Hill did not respond to an inquiry for the specifics of such programs, yet Scarborough’s emphasis on strong polymer program connections between institutions in Asia and UA gave subtle hints as to what one of them might consist of.

As for the “Named Honors College”—well, UA’s constituents can only guess.