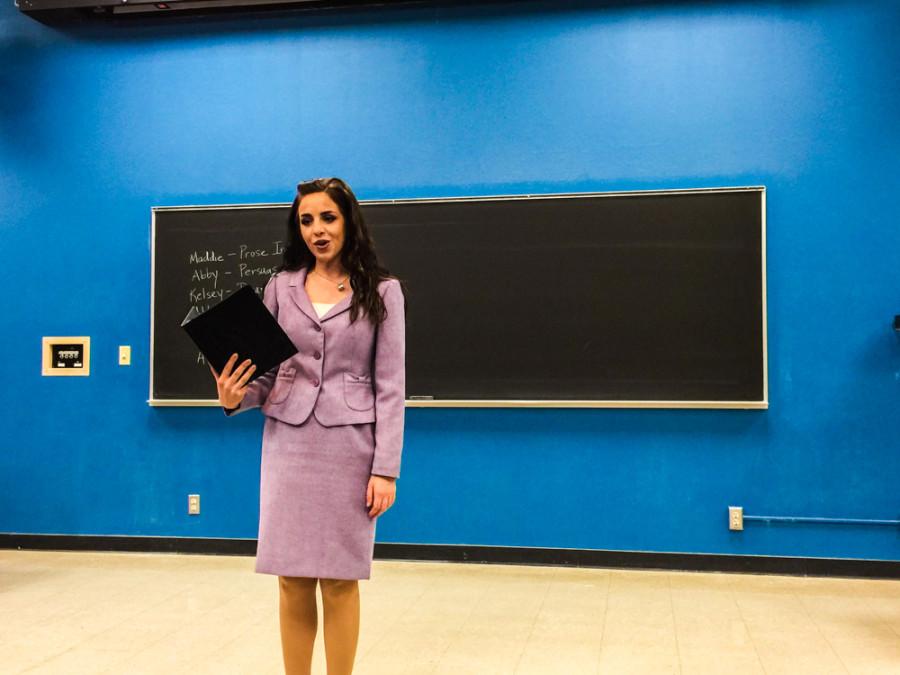 Members of the UA Speech and Debate Team presented an array of fascinating speeches last Wednesday, Oct. 21, to showcase their different strengths and give students performances unlike the primarily informative speeches of basic speech courses.

Many students, including UA senior Casey Hodgkiss, were attending the showcase for extra credit, but ended up finding enjoyment and helpful tips for their own classes.

“Originally, it was for extra credit for a class,” Hodgkiss said, “but upon going to this event, I have learned different skills for my speech class and how to present myself in front of other people and be animated.”

“Personally, I liked all of Abby’s speeches. I felt like hers were very formal, professional, and her last one I think was the best one of the night,” sophomore Claudia Judele said.

Zerull gave speeches on medical malpractice with residencies, a mother with postpartum depression, and an impromptu speech where she was given seven minutes to create and address a speech from a quotation given to her.

“My favorite part was probably the interpretation speeches,” Hodgkiss said. “I didn’t really know what those were going to be about and I realized those were more like acting then they were speeches. I thought that was kind of cool and a different approach.”

“One of the alumni is in one of my classes and she started talking about speech and debate,” Gieseck said when explaining why she joined the team. “I had no idea what it was—my high school did not have a team—but the alumni member said they go to tournaments and I thought that sounded fun.”

Gieseck said the speech team’s season consists of many different tournaments, mostly on weekends, in states such as Ohio, Virginia, and Pennsylvania. The team usually leaves on Friday and then competes all day on Saturday and Sunday.

This fall the team will travel to universities in Virginia, Pennsylvania, Illinois, Ohio, and New York for tournaments.