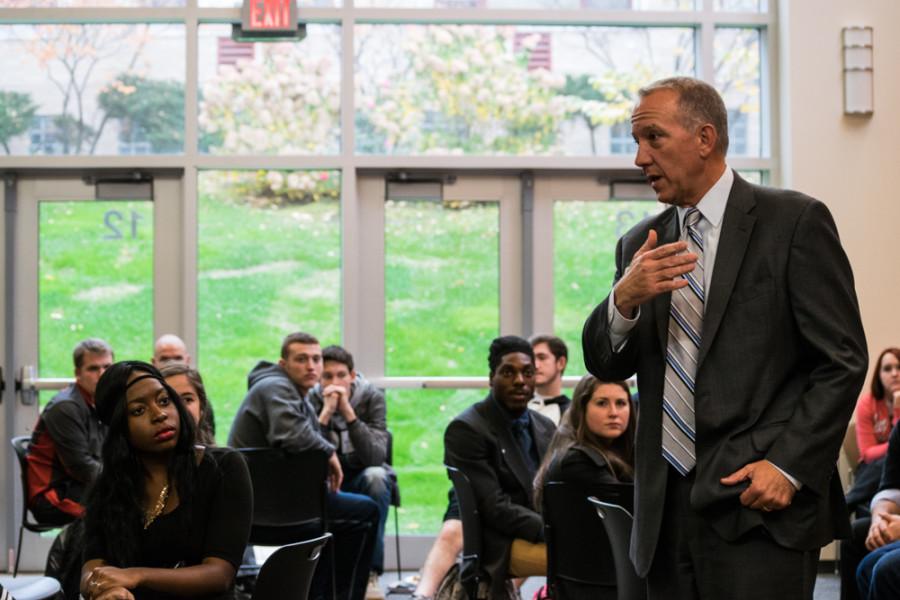 As traditional avenues for political engagement diminish, new means are required to get younger generations to participate in local civics.

Around 50 University of Akron students gathered on Oct. 27 in the Honors College common room to voice their political concerns via text message at the “Text, Talk, Vote Akron!” event.

Text, Talk, Vote Akron! is a way for young people to talk about voter and community engagement, sharing their thoughts on the issues most important to them through a text-based discussion.

Students were asked to form groups of three to five people and then designate one phone to read and respond to the prompts sent to their phones.

After organizing their groups, UA political science professor William “Bill” Lyons instructed students to text “AKRON” to 89800 to engage in the technology-driven conversation.

Students were then sent 25 prompts via text message; they ranged from asking what critical ideas the new mayor of Akron needs to discuss and how the students would like to be engaged as a constituent.

To engage with students in person, two of the three mayoral candidates attended the event. Democratic candidate Daniel Horrigan and independent candidate William “Bill” Melver took questions from students and in the hopes of addressing their concerns.

“The event at the University was great. It was a full room with folks from all different backgrounds in it,” said Georgia Hollister Isman, the event’s project manager. “As I walked around afterwards there was lots of positive reaction–people like the conversation and they felt like they were having it in a new way.”

UA spokesman Dan Minnich said only 4,694 of the 25,177 students enrolled at UA this fall are actually from Akron. And even though the percentage of students who are registered to vote in Akron is only around 18 percent, Lyons still thinks it is important to address those students.

Hollister Isman agreed with Lyons and said it was important to target UA students even if they aren’t registered to vote in Akron.

“Obviously on a university campus you also get some folks from elsewhere. That is fine too. They won’t get to vote for mayor in Akron but they will get to vote for local officials in their hometown, so hopefully this got them thinking some about voting and civic engagement,” Hollister Isman said.

Seniors Ben Olsen and Wyatt Nolker were two of several students in attendance at the Knight Foundation-sponsored event on Tuesday.

“In my opinion, the event went well and was organized,” Olsen said.

“I liked the fact that the mayoral candidates were there. That tells me that they care enough about our generation to come to speak to us,” Nolker said. “However, I really didn’t care that they were there, because I am not from Akron and do not plan on voting in the Akron election.”

If students missed the event on Tuesday and are still interested, the prompts will be available through Nov. 3 by texting “AKRON” to 89800 or visiting the website bit.ly/texttalkvote