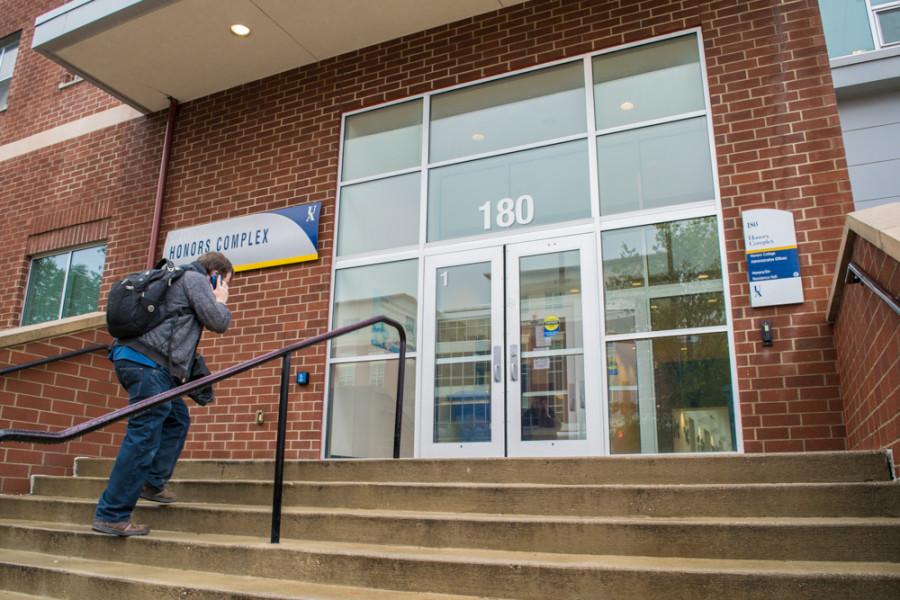 A student walking into the Honors College.

After rebranding UA as “Ohio’s Polytechnic University” and adding the “Lebron James Family Foundation” prefix to the UA College of Education, administrators are now turning their attention to the Honors College.

The topic was first mentioned briefly near the middle of President Scott Scarborough’s State of the University speech last Tuesday, Oct. 20. He pulled up a slide named “Key University Initiatives,” which listed the dates and names of “initiatives” discussed in recent months.

One of the initiatives, which had no date beside it, was called “Named Honors College.” But Scarborough neither clarified the statement’s meaning nor gave a timeline for its implementation.

Lakeesha Ransom, who this year replaced Dale Mugler as dean of the UA Honors College, confirmed plans to “name” the Honors College in order to “create a shared identity” of the “college’s strong legacy of community.”

UA spokesman Wayne Hill said that, because the Honors College “isn’t a named college at the moment,” is it inappropriate to call it a “renaming,” but only a “naming.”

Hill said this idea has been under discussion for much time.

Ransom said she doesn’t know many details about the naming, as she only has only been dean for three months.

In an emailed statement, Hill said the project’s timeline is fluid, and that it is “premature to talk about any specific names.”

Ransom said there are a few “possibilities” for a name, but was unwilling to give details. She added that when determining the name, the University will consider alumni or “people who have strong connections to the University, who would like to be associated with it, who have a strong legacy, and who want to contribute to the vision of the college.”

The “naming” of an honors college, however, has happened before under the leadership of Scarborough and Ransom.

When Scarborough was the provost of the University of Toledo, Ransom was the dean of Toledo’s honors college, which was rebranded to “The Jesup Scott Honors College” during her and Scarborough’s tenure.

As another example of naming colleges, Ransom referred to The Humphrey School of Public Affairs at the University of Minnesota, where she was a former regent.

“It’s a nice way to reinforce not only the legacy of the institution, but also the values associated with that legacy,” Ransom said about naming, which often involves honoring those who give substantial donations.

Hill said there were no specific donations prompting the move to name UA’s Honors College.

Students had various responses to the naming possibility.

“By naming the [College of Education] after LeBron, we’ve gained so much publicity,” said sophomore honors student Kaylee Gutschow. “I think that is a great benefit of naming colleges after well-known people.”

“With all of the problems at the University, [administrators] are focusing on such insignificant changes,” Judele said. “They should focus on the quality of education that students are getting, instead of just what we call things.”

“If it was named after a company with local prestige, it would represent ties to the business world and opportunities post graduation,” Davis said.