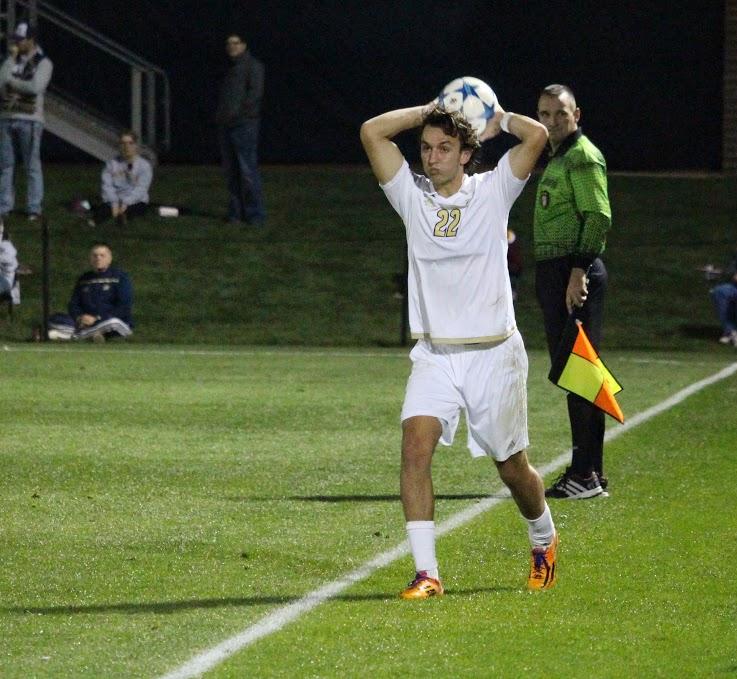 Robbie Dambrot throws the ball in

A goal from Brad Ruhaak three minutes into the game and a stout defense allowed the University of Akron men’s soccer team to defeat West Virginia, 2-0, Wednesday night in Morgantown, West Virginia. The win gives the Zips at least a share of their 18th Mid-American Conference regular season title

Ruhaak’s goal, his second on the year, came soon after an Akron corner kick. The ball was played to Stuart Holthusen, who found Ruhaak and he planted the ball into the back of the net.

“I’m proud of the team,” Akron head coach Jared Embick said. “We had to play most of the game without two of our key offensive weapons, but we stepped up and got a big victory on the road. We clinched at worse a share of first place in the MAC. This effort really showed the strength of our team and the depth.”

The Zips defense held the Mountaineers without a shot until almost 17 minutes into the game when Jamie Merriman kicked a shot over Zips’ goalie Jake Fenlason.

In the first 12 minutes after the intermission, the Mountaineers posted three shots, including two on goal, but still could not put the ball in the net.

Akron received its third corner kick of the match at the 64:25 mark, soon after the kick West Virginia goalie Daniel Diaz came out to grab the crossing pass, but slipped leaving the net wide open and Sam Gainford jumped on the opportunity and deposited his seventh goal of the year.

Despite being down 2-0, West Virginia did not quit, registering three more shots, but still could not get one past Fenlason, who earned his sixth shutout of the year.

For the match, Akron out-shot the Mountaineers 9-8, but were out-shot on goal by a 4 to 3 margin. Fenlason made four saves in the contest.

To finish out the regular season, the Zips come home to host No. 25 UCLA on Sunday at 1 p.m. and Bowling Green on Saturday, Nov. 7.