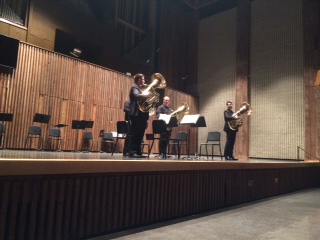 The night was hallmarked by the robust, resonant sounds of tubas and euphoniums as ensembles and quartets performed pieces ranging from festive folk songs to classics.

UA students and music-lovers alike gathered in Guzzetta Hall on Oct. 26 for “Octubafest.”

The ensemble was directed by Christopher J. Blaha and conducted by Stephen Hanhold. The quartets were coached by Stephanie Lumpkin.

The performance began with the full ensemble playing the songs “Canzona” by Vaclav Nelhybel and “Virga Jesse” by Anton Bruckner, arranged by Kaundinya.

On the conclusion of these pieces, Blaha introduced the quartets that were about to enter the stage. In Blaha’s words, the quartets performed “just about every genre of music you can imagine.”

The performance included pieces such as “When Irish Eyes are Smiling,” which is an Octubafest tradition; the popular “Penny Lane” by Paul McCartney and John Lennon; and “Moondance” by John Stevens. “Moondance” was performed by a euphonium quartet composed of UA graduate euphonium students.

To finish the night, the full ensemble joined together on stage again to perform two final pieces: “Prorate filii Israel” by Giacomo Carisimi, and “Canzona per Sonare No. 1, ‘La Spiritata’” by Giovanni Gabrieli, arranged by Forbes. Hanhold explained that “Plorate filii Israel” is a 17th-century piece that “is very sad and lamenting,” but the ensemble was “very happy to play it.”

UA biomedical engineering freshman Chloe Tennant was among those in the audience.

“I love the sound of tuba and euphonium… they had a great tone, and there were a lot of really great players up there and I really like the way the two [instruments] kind of blend,” Tennant said.

For more information on The University of Akron School of Music and upcoming brass shows, visit www.uakron.edu/music.