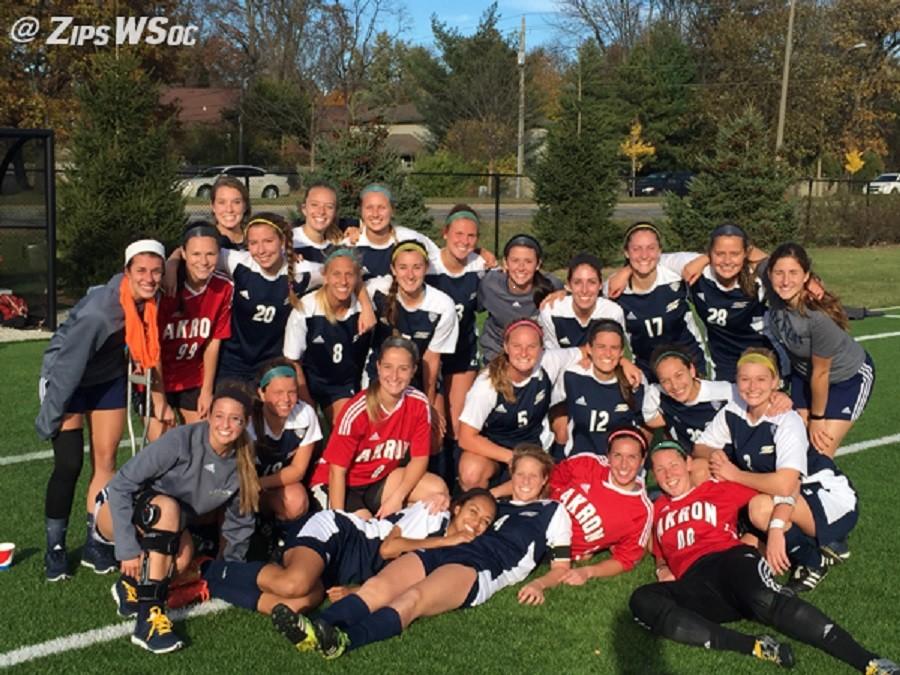 The women's team celebrates the upset over Ball State

The eighth-seeded University of Akron women’s soccer team bested No. 1 seed Ball State University in penalty kicks, 4-3, Sunday afternoon in the first round of the Mid-American Conference tournament in Muncie, Indiana.

Hannah Werth blasted her penalty kick into the back of the net, and the Ball State Cardinals watched as their own attempt to continue the penalty kicks sailed left of goal, giving the Zips the monumental win.

The victory marks the first time in the history of the women’s soccer program in the MAC tournament that Akron has advanced to the semi-finals. Next: a trip to Kalamazoo, Michigan to face Miami University of Ohio on Friday. The game time has not yet been set.

All this from a team who lost to Buffalo, 3-1, on Friday and then had to wait out two other games to be played before finding out that they had secured their first tournament appearance since 2011.

“Ball State [is] a quality side and have shown that all season, and we knew they were hot favorites coming into this game as the No. 1 seed, and at home,” head coach Noreen Herlihy said. “We had a game plan and the players executed it perfectly.”

The two teams battled through 110 minutes — regulation and two 10-minute overtimes — of scoreless soccer. The Cardinals actually out-shot Akron 23-3, including a 7-2 advantage in shots on goal.

Neither goalie would budge. Akron’s Annabelle Hegeman was clutch in recording seven saves in goal.

“We had some good possession and were unlucky not to go 1-0 up when we hit the crossbar. They were always dangerous going forward, but we felt our teamwork and organization was strong enough to keep them out,“ Herlihy said.

In the penalty kicks, Holly Ohradzansky lined up, took aim, and had her shot find its way past Cardinal goalie Alyssa Heintschel on the first shot for the Zips.

Ball State’s Chels Swackhamer responded with a goal for the Cardinals to knot up the score.

Next up, Rachel Schirripa for the Zips was able to deposit the ball in the right corner of the net out of the reach of the diving goalie.

Hegeman was able to make a diving save of Ball State’s Leah Mattingly’s shot to give Akron a slight edge at 2-1.

On the third shot for Akron, Erica Schrader went right, and Heintschel went left and the Zips enjoyed a short 3-1 advantage.

Lorina White was next for the Cardinals. Her shot made it past Hegeman, cutting the Akron advantage to 3-2.

Sarah Sivic, who has been 2-2 on penalty kicks in the regular season, sent her shot to the left side; but the goalie went left, tipped the ball, and it bounced off the post.

Abigail Boswell of Ball State added to the drama by sending her shot past Hegeman, knotting the penalty kicks at four each.

Werth then stepped to the line and converted her shot to give the Zips a 4-3 advantage. All they needed was one more stop.

The pressure was passed to Ball State’s Lauren Hall, who had to make her shot to continue the penalty kicks. Her shot went wide left, both allowing the Zips to advance and to break into a minor celebration.

“We are delighted for the players and we look forward to the semifinal,” Herlihy said.

The Zips defense played their strongest game of the year against the high-powered offense of Ball State. The Cardinals recorded three corner kicks in the first 45 minutes, but Akron cleared each one without allowing a shot.

More opportunities came to Ball State, as the team had four corner kicks in a nine-minute span (56′-65′). However, Akron’s defense each time got the ball out of the box and caused havoc for the Cardinals.