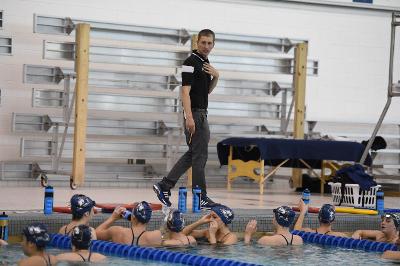 Coach Peresie talks with the team

The University of Akron Swimming and Diving team traveled to Athens last Friday to take on Ohio University and left with a 167-133 triumph to keep its season unblemished.

Starting off the meet, Akron’s 400 medley relay team of Luka Szynal, Paloma Marrero Munoz, Erin Seiler and Ragen Engel finished with a first-place finish in a time of 3:48.58. This time placed as the eighth fastest in program history.

Sweeping up the top two spots in the 100 backstroke, Szynal swam the 100 back in a time of 56.59 for first place and Sadie Fazekas followed up closely in 57.73.

Engel continued a good day with a first-place finish in the 100 freestyle (51.75). Her time was also the eighth fastest in program history. She also finished second in the 50 free (23.85), along with her first-place medley finish.

In a repeat of how the meet started, Akron finished the 200 freestyle relay in first place with a time of 1:35.11 with the team of Engel, Hannah Raspopovich, Fazekas, and Susan Franz.

“We knew we would be in for a battle tonight as Ohio has a strong program, full of tough competitors. I think we did a good job moving from one event to the next and not letting a good or bad performance affect the next one,” said head coach Brian Peresie. “As we get farther and farther into the season, we keep pushing harder and harder with our training. I think we are doing everything we need to be doing to set us up to be at our best in February and March.”

For the night, Akron collected nine first-place finishes, ten runner-up positions, and raced to third in another eight events.

The team gets a well-deserved rest until returning to the pool as part of the annual Magnus Cup invitational hosted by Cleveland State University from Nov. 20 to 22.