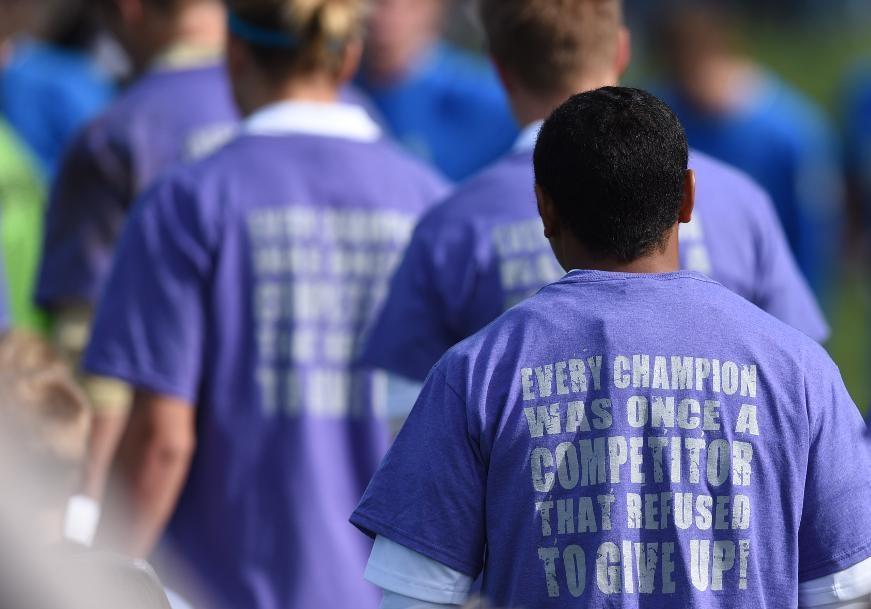 The team supports the "Dan the Man Fund"

No. 25 UCLA traveled to Akron to take on the sixth-ranked Zips and headed back to California with a 4-2 victory, snapping the Zips’ nine-game unbeaten streak on Sunday at FirstEnergy Stadium – Cub Cadet Field.

The Bruins (8-7-1) never trailed in the match, but neither had control until the final few minutes, as each team recorded 11 shots. UCLA had a slight 5-4 edge in shots on goal.

Seya Adekoya opened the scoring by converting a defensive turnover into his 10th goal of the year at the 7:14 mark off an assist from Abu Danladi.

Akron (12-3-2) scored the equalizer at the 28:12 mark when Adam Najem deposited his eighth goal of the season into the net. Niko De Vera dribbled the ball up the sideline and found Stuart Holthusen in the middle, who slid the perfect pass into a streaking Najem who knotted the score.

UCLA struck again with a goal in the 30th minute after yet another misplay in the Zips’ defensive end, as Danladi found Jose Hernandez for his tenth goal, giving the Bruins a 2-1 lead that they would carry into the locker room at the intermission.

Najem had a chance to give the Zips their first lead in the 75th minute but his shot struck the crossbar.

The Bruins instantly stole the momentum off of the miss as Danladi pushed the ball up the field to Adekoya, who scored his second goal of the game and his 11th of the season, for what proved to be the game-winning tally, at the 74:27 mark.

Akron whistled for a foul in the box in the 82nd minute that resulted in Jose Hernandez booting in the penalty kick to give UCLA the final 4-2 margin.

Before the game, the Zips paid it forward by donning special t-shirts to promote awareness and help raise funds for Ashland head women’s soccer coach Danny Krispinsky, who is currently battling colon cancer. It is called the “Dan the Man Fund.”

The Zips close out the regular season this Saturday at 7 p.m. on Senior Night, taking on Bowling Green State University. Akron needs a win or at least a tie in the match to earn the outright Mid-American Conference regular-season title and the right to host the MAC Championship from Nov. 13 to 15.