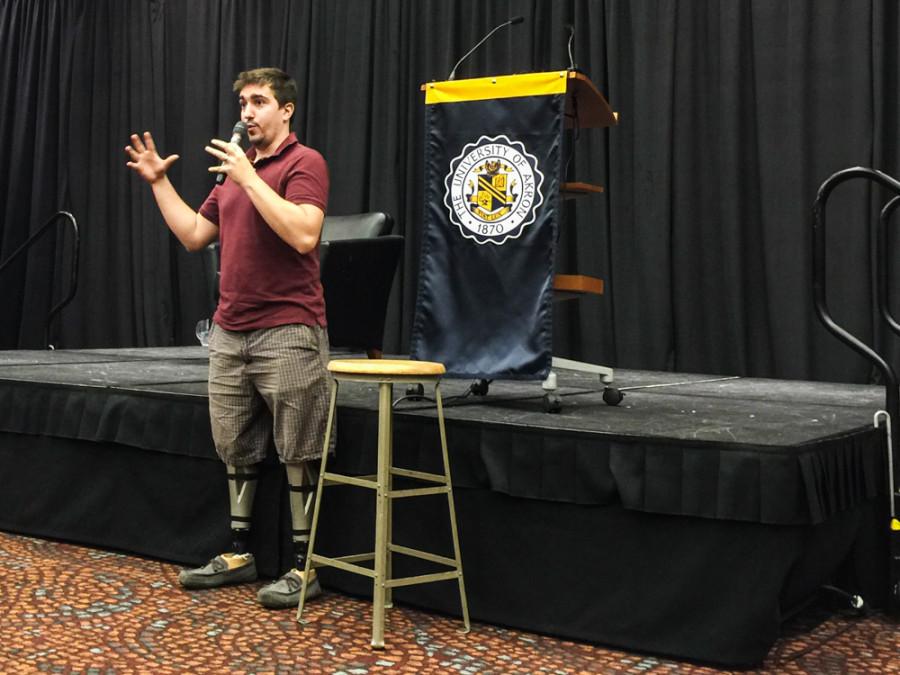 Jeff Bauman shares his story of recovery with students.

When Jeff Bauman went to the 2013 Boston Marathon to cheer on his future wife, he did not expect to bump into one of the men behind the bombing that would kill three people, injure more than 260, and cause his own legs to be amputated.

Now on tour around the country, Bauman came to UA last Wednesday, Oct. 28, to tell of his experience and subsequent recovery. The event, held by the Zips Programming Network, was in the Student Union Ballrooms.

Shortly after Bauman bumped into a man on the street, the bombs exploded, causing serious damage to his legs. Bauman would later identify the man he bumped into as Tamerlan Tsarnaev, one of the two men responsible for the bombing.

After hours of surgeries, Bauman’s legs were amputated up to his knees. He now sports two carbon fiber prosthetic legs and works every day to increase his balance and better his gait.

“Don’t ever quit,” Bauman told the audience. “I quit a couple times, but you have to keep getting back up.”

Bauman shared his trials and tribulations of recovery, learning how to walk again, and his appreciation for Carlos Arredondo, who rushed Bauman to an ambulance after the bombing, saving his life.

Not letting his injuries hold him back, Bauman returned to the marathon in 2014, and also plans to attend in 2016 to support his wife and other runners.

Even though recovery has not been easy for Bauman, he has not lost sight of his goals. Before April of 2013, he was an avid mountain climber; he says he plans to continue.

“I’m going to work my tail off at it,” Bauman said after admitting that returning to climbing won’t be easy.

Through his recovery, Bauman wrote a book titled “Stronger,” which is soon to be a Lionsgate-produced movie.

UA senior Jennifer Hanson was one of many students in attendance.

“His story was really intriguing to me. I was interested to see what his perspective was coming away from such a dramatic life change,” Hanson said.

“I thought it was awesome how he recovered from that experience,” Propst said.

Those interested in learning more about Bauman’s road to recovery can visit jeffbaumanstronger.com