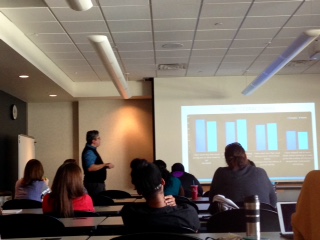 Peralta speaks about how men and women engage in unhealthy habits when consuming alcohol.

Drinking in college has become a normality, but many students don’t realize the consequences of alcohol on their health and behavior.

Peralta first addressed the issue of body image norms and how beauty is defined. He spoke about how students have a social pressure to conform not only to a certain body image, but to drinking.

Without proper diet and exercise, alcohol can cause weight gain because of the high caloric content. College students may begin to see the effects on their body as they continue to drink.

Excessive drinking and struggling to maintain one’s weight often result in many forms of eating disorders and other bad habits.

A term to define a mixture of alcoholism and anorexia nervosa is called drunkorexia. Generally, a person suffering from drunkorexia will deprive themselves of food during the day so they can keep calories under control when they go drinking later. Although more men engage in binge drinking, more women than men suffer from drunkorexia, according to the Recovery Connection website; dedicated to providing information about addiction recovery.

Along with bad habits to maintain weight while drinking, students also take drastic measures so they can prepare for a night out.

Peralta said some students will not eat as much during the day if they know they are drinking later.

From a convenience sample of 841 undergraduate students aged 18-24 at a midwestern university, it was found that 29.4 percent of men and 28.1 percent of women will eat less than usual when they know they will consume alcohol, according to Peralta.

He also gave an example from a 2002 publication of Gender Issues. It stated that Jessica, a college student, said if her friends and her knew they were going to drink later in the week, they would exercise earlier in the week.

UA student Kelsey Kroggel commented that people who engage in that unhealthy behavior should be more careful. “You’re putting getting drunk and alcohol over your nutrition and it’s not good. You should at least eat something, but if you’re concerned about weight, just watch what you eat,” she said.

With less food in one’s body and a higher intake of alcohol, it can lead it a higher blood-alcohol level.

“Skipping meals is dangerous, I encourage people to not engage in that kind of behavior,” Peralta said. According to the presentation, data shows that four out of five college students drink, while half engage in binge drinking. For women, four or more drinks is considered binge drinking; for men, five or more.

Peralta’s advice for students who are going to drink is to monitor the number of drinks when out, so they can make sure they stay at a level where they can have better control.