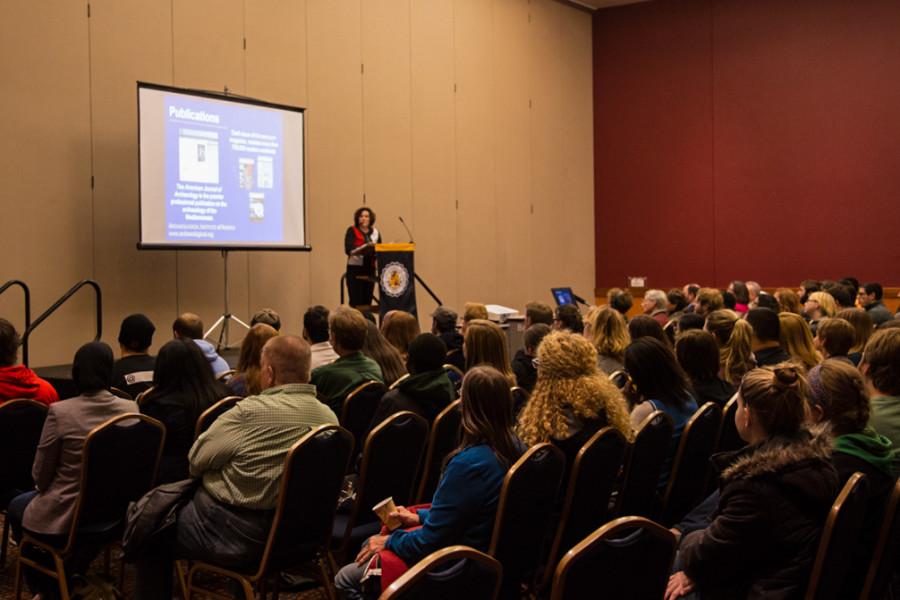 Sandra Pianalto gives a lecture in the College of Arts and Sciences.

In most fields, taking risks is usually said to have a negative connotation, but in the eyes of Sandra Pianalto, former president and CEO of the Federal Reserve Bank of Cleveland, it is the stepping stone to achieving greatness.

Pianalto came to the university last Friday, Oct. 30, to speak to students at the College of Arts and Sciences about her experiences working for the Federal Reserve.

To kick off her presentation, she spoke briefly about her past at The University of Akron. Her love for math and politics led her to a difficult, yet successful, decision in choosing a BA in economics, which she still uses to this day.

Pianalto recounted her life story to the audience: how she was born in Italy, as well as how she grew a love for public service early in her life.

She said her family was the prime example of taking risks in order to succeed.

“In my eyes, my parents are the true success story, not me,” Pianalto said. “My mother, having a third grade education, and my father, a fifth grade education, made the decision to move overseas so their four children could live a better life. All four of their children were able to get college degrees and become successful. If they did not take that risk I would not be standing here today.”

During her time working behind the scenes, she was able to experience first-hand the decisions made by executives that have direct effects on the economy.

The year 2007 marked one of the highest inflation rates the United States and Europe had ever seen. The Federal Reserve, forced to intervene, lent money to companies such as AIG to instill credit. By December of 2008, the rate of inflation dropped to zero, but this still was not enough to fix the economy.

After the committee adopted an inflation target, the problem seemed to resolve itself from there. Pianalto said, “…times were uncertain and new things were constantly unfolding in uncharted waters. Decisions had to be made sometimes without all the info at hand; however, I believe the right decisions were made…”

“Building a strong foundation is key to anyone’s success,” she said, replying to a question about her advice to undergraduate students. “If I would have known I was going to be the president and CEO Federal Reserve Board, I would have pushed myself to get a Ph.D. in economics. In order to achieve greatness you have to push yourself outside of your comfort zone to see progress and accomplish your goals.”

Pianalto continued speaking about her experience in the Federal Reserve and told the audience the story of how she was nominated for President of the Reserve and encouraged to take on the position.

“When the president told me he wanted me to apply for the position, I didn’t think I could do it,” Pianalto said. That was until she was encouraged by another co-worker and friend to take the job.

Pianalto admitted, as president, she struggled with convincing other board members to listen to what she had to say regardless if they disagreed or not.

“When people have their mind made up about you, they stop listening. They tend to tune you out and continue thinking what they thought of you previously,” Pianalto said.

This an issue faced by many politicians and authoritative figures, but was especially difficult for Pianalto since she was one of the few women to hold power on the Federal Reserve Board.

“Integrity was a value for me that I was said to have by many co-workers,” Pianalto said. “If I were to advise students on one character trait you should have in any field of study, it would be integrity.”