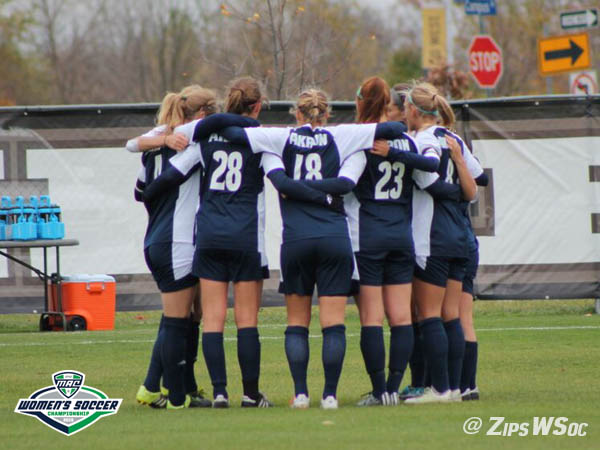 Teammates gather before taking on the RedHawks

The No. 8 seed University of Akron women’s soccer team fought hard in their semifinal round game of the Mid-American Conference tournament  against the No. 5 seed Miami (Ohio) before falling, 1-0, to the RedHawks.

“It is always disappointing to lose in a semi-final especially on a PK but we lost to a better team on the day,” head coach Noreen Herlihy said. “Our players gave everything they had and we are so proud of what these players have accomplished this season. It’s been a season that the seniors can remember for sure.”

The Zips (6-13-2) played an impressive defense game for 90 minutes. The back line of Katie George, Jenna Andersen, Hannah Werth, Rachel Baughman, and Kiana Zuk made sure that the RedHawks offense worked hard and did not get any easy shots.

Annabelle Hegeman made four saves while playing in goal, and frustrated Miami’s offense by making several plays away from the goal also.

Offensively, Akron played to win as they registered two shots, but also missed opportunities that were cleared by the defense before finding an open teammate. Karin Norman and Baughman each had a shot.

Akron may have played its best defense of the year in the first half. The RedHawks (11-7-2) recorded nine shots in the first half but only had one shot on goal. Their best opportunity to take the lead was when Courtney Evans shot hit the cross bar and bounced out of the box and no one was home to get the loose ball.

Early in the second half, the Zips played a great pass up the field to Sarah Sivic, who found a streaking Baughman on the right side with a cross pass, but her shot curled to the left and went wide of the net.

Soon after that play, Akron was called for a tripping foul inside the box. The RedHawks’ Shannon Stearns stepped to the line and planted the ball just in the left side of the net just past a diving Hegeman.

The Zips did not give up and kept the pressure on the RedHawks defense. had opportunities but could not get open enough to get a good shot. George and Andersen were moved forward for attacking purposes in the final minutes but the RedHawks were up to the challenge.

Akron ends the 2015 campaign with an overall record of 6-13-2 and 3-8 in the MAC. Under first year head coach Noreen Herlihy, the team accomplished quite a bit. The Zips made the MAC tournament for the first time since 2011, advanced to the semifinal round for the first time in program history and the three wins in MAC play are also the most wins in the MAC since 2011.