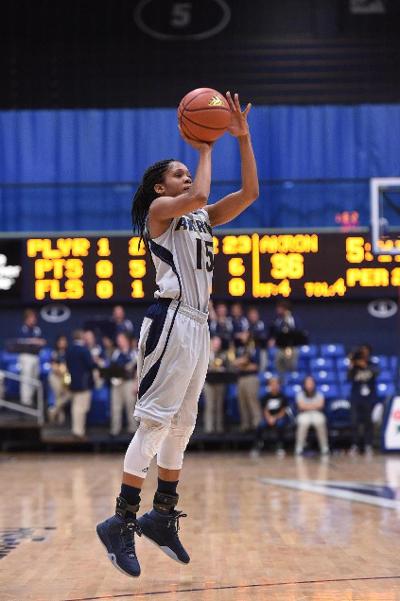 The University of Akron women’s basketball team used an explosive first half to defeat the Clarion Golden Eagles 79-50 in an exhibition game Sunday afternoon at the James A. Rhodes Arena.

Anita Brown accounted for 18 of her team-high 23 points in the big first half that saw the Zips sprint to a 49-29 lead at the intermission.

DiAndra Gibson, 12 points, five rebounds, and three assists and Greta Burry, 11 points and nine rebounds, served as offensive backup for Brown, who also contributed seven rebounds to the cause.

The Golden Eagles started the game by hitting a three, but Akron fought back with an 11-2 run with Brown scoring six of her points.

The Zips did not stop there and led after the first quarter 25-11. After Malone scored the first seven points of the second period, Akron went back to work and eventually had their largest lead of the first half at 42-22 when Brown hit her only three point shot of the night with 5:20 to play.

The momentum of the first half carried into the third period as Akron scored the first 16 points and held their largest lead of the game at 65-29 with 5:19 to go in the period.

With the starters on the bench for the last period, Clarion out-scored the Zips 17-11 for the final margin.

In all for the Zips, 12 of the 14 players who saw playing time made it into the scoring column, and no player played more than 26 minutes.

The women now travel to Florida for the season opener against Florida Atlantic on Nov. 14 at 7 p.m. in Boca Raton.