Football team gets back to winning 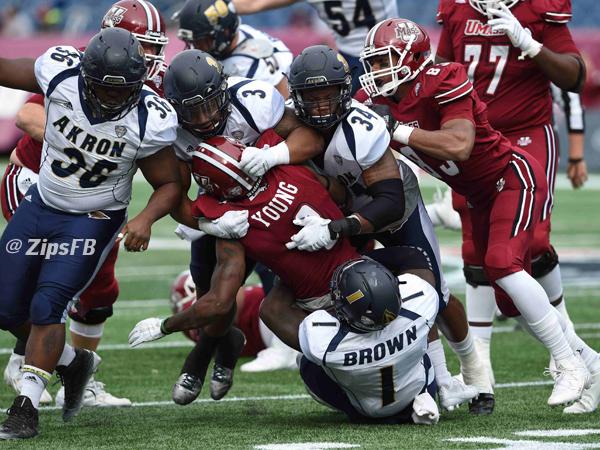 The University of Akron’s football team edged the Minutemen from the University of Massachusetts on Saturday, 17-13. The victory snapped a two-game losing streak for the Zips.

Thomas Woodson used his arm and legs to account for both Akron touchdowns in the game by throwing a 27-yard pass to Austin Wolf and later ran the ball in from 15 yards out for the second touchdown.

Meanwhile, Akron’s defense held the Minutemen to 261 yards of total offense on the day. UMass entered the game averaging 423 yards a game.

The Akron defense was led by linebackers Dylan Evans and Jatavis Brown with 11 tackles each. Brown also added another sack to give him 8.5 on the season. Cody Grice added a sack of his own to help the effort.

DeAndre Scott and Kris Givens aided the defensive effort with interceptions in the game. For Scott, it was his fifth pick of the campaign and eighth in his Zips’ career.

The defense held UMass quarterback Blake Frohnapfel to 19-of-43 for 173 yards. Entering the game, Frohnapfel was completing nearly 60 percent of his passes.

On offense, Woodson was 15-of-27 for 174 yards and a touchdown while rushing for 58 yards. Conor Hundley led all rushers with 92 yards on 23 carries, while Jerome Lane topped receivers with 56 yards on four receptions.

The game did not start well for the Zips as UMass running back Jamal Wilson ran for nine yards to top a five-play, 40-yard drive with 7:50 remaining in the first quarter.

Akron fought right back as Woodson moved the team down the field and then found Wolf going down the middle between two UMass defenders to even the score at seven with 3:15 left in the first quarter.

The turnover bug hit Akron in the second stanza as a Woodson interception and later a fumble allowed the Minutemen to start twice on the Akron side of the field. The defense held UMass out of the end zone and settled for two field goals to lead at the half 13-7.

The second half was a different story for Akron. The defense started the half by stopping the UMass offense on a third down and nine to go play, Brown sacked Frohnapfel for an eight-yard loss.

Akron then mounted a 10-play, 73-yard drive capped off with Woodson rushing up the middle, breaking two tackles, then carrying Minutemen defenders on this back into the end zone for the score to give the Zips their first lead of the day at 14-13.

On the next drive for UMass, facing a fourth down and ten to go, Grice found himself in position to sack Frohnapfel for an eight-yard loss and give the ball back to the Zips.

In the final quarter, Givens pick gave Akron the ball back and they responded with a 13-play drive that culminated in a Robert Stein field goal of 36 yards for the final margin.

Scott saved his interception until the last possession of the game for UMass, picking off Frohnapfel to cap the win on the first play after the Minutemen had converted on a fourth-and-one.

Akron’s next game is Saturday, Nov. 14, as they play their final regular-season road game at Miami (Ohio). Kickoff is set for Noon.