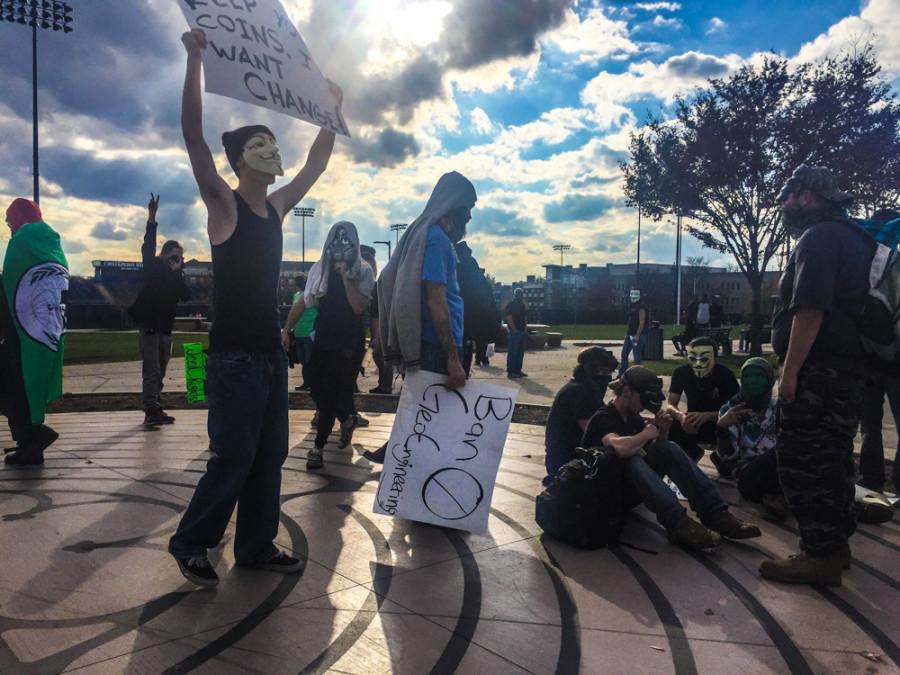 Unlike recent campus demonstrations — whose sole emphases revolve around condemning UA’s Board of Trustees, president, and higher administration — a different group of protestors paraded through campus last Thursday, Nov. 5.

The group was Anonymous Akron, a subgroup of the widely known but loosely organized online anarchic group called Anonymous, whose members are best distinguished in public by the Guy Fawkes mask made popular by the 2006 film “V for Vendetta.” Anonymous attracts both activists and “hacktivists,” and is frequently involved in censures or cyber-attacks on governments, businesses, and religious groups.

On Wednesday, Nov. 4, Anonymous Akron posted a letter on its Facebook page explaining the next day’s protests, saying that its demonstration would coincide with the global “Million Mask March” that is “traditionally an international day of activism.”

Many societal grievances were represented, including but not limited to marijuana legalization, net neutrality, the Citizens United court case, genetically-modified organisms (GMOs), and concerns about fluoride in city water. And, of course, UA President Scott Scarborough: “We will also be joining in solidarity with University of Akron students as they protest against the university president,” the Facebook letter read.

The march began at noon at the Akron Transit Center. The group — composed of about 30 members of varying ages, most wearing Guy Fawkes masks or some other artifact to cover their face, and carrying big signs, placards or posters — then walked to the Federal Courthouse and the Summit County Courthouse before heading to UA’s campus. Once there, the protesters stopped to gather in the Coleman Commons and bring out the loudspeakers, as well as talk to students walking or sitting nearby.

One of the protest organizers, who only identified himself as “Guy Fawkes,” was there primarily to support marijuana legalization, but added that the protest was “against corruption and for freedom,” and said his “personal feeling is that [Scarborough] is a dictator.”

Protestors were not all students either, as was the case for Ashley Kamovitch, who traveled to the march from Western Pennsylvania with her boyfriend and two friends. They were demonstrating against cities that put fluoride in their residents’ drinking water.

Kamovitch said she heard about the event on Facebook, and it was her first time demonstrating outside of her hometown’s city council. She wasn’t familiar with any of the happenings of the University.

“I respect Anonymous for what they stand for and their beliefs and what they are fighting for,” Kamovitch said under the blaring of the megaphone behind her.

“The way that they came in wasn’t the best way to do it,” said sophomore Mike Malenic. “I don’t think anarchy in any way is a good idea…there’s a way to get a point across without trying to scare people.”

“I think that it was positive; I spoke with them and they supported good things, like running the government right,” Foster said. “They got people’s attention and other ways haven’t really gotten any attention.

“Guy Fawkes” said many of the well-known groups in opposition to the UA administration contacted Anonymous Akron for help, including The Devil Strip and Facebook pages “Save the University of Akron from Scott Scarborough,” “Graduates Over Greed,” and “Allied UAkron.”

Each of these groups, however, said they did not reach out to Anonymous Akron, though they might have spoken innocuously with some of its members before.

Another of the protest organizers, who would only be identified as “Vitamin D,” said Anonymous Akron does the event every year.

“Not as many people showed up as we invited, but that’s how it usually happens,” Vitamin D said. “But this is the biggest one we’ve had in Akron so far.”

The march was not entirely peaceful though. According to an Akron Beacon Journal on Nov. 5, three protesters were arrested in front of the Akron Federal Building — two charged with disorderly conduct, the other with burning a flag.