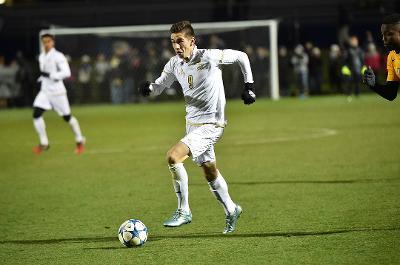 The victory puts top seeded Akron into the championship game for the fourth year in a row. Akron seeks its 12th MAC Championship title and 30th NCAA Tournament appearance on Sunday at 1 p.m. as they take on Buffalo. The third seeded Bulls defeated second seeded Western Michigan in overtime, 3-2, in the first game of the day.

The game was played with temperatures in the 30’s and snow flurries falling at time, but that did not stop the red hot Zips (14-3-2) from taking the early lead against the Mountaineers (7-12).

Najem opened the scoring on a free kick giving him the team-lead by putting in his ninth goal of the season at the 22:23 mark. The free kick, set up by a foul that drew a yellow card by Alec Boerner, was from just outside the box into the corner of the net to give Akron the 1-0 lead.

The Mountaineers appeared to try and slow down the Zips with a physical game, as they were called for 23 fouls for the game, including five yellow cards. The Zips were guilty of only eight fouls and were issued one yellow card.

Akron made the 1-nil lead stand through the end of the first half and into intermission. Goalie Jake Fenlason made four saves in the first half.

At the 48:58 mark, Holthusen scored his fourth goal of the season when he nailed a shot from the top of the box past Boerner on a ball that was played into the middle by Najem giving Akron a 2-0 advantage.

The lead was sliced in half when the Mountaineers got on the board at the 67:48 mark on an own goal when an Akron defender accidently headed a ball played into the box past Fenlason.

Unfazed by the defensive miscue, the Zips answered right back five seconds later off the restart; Holthusen notched his second goal of the evening to extend the Zips’ lead to 3-1. The score gave Holthusen back-to-back two-goal games after he did the same versus Bowling Green last Saturday.

Jamie Merriam brought the Mountaineers within one by finding the back of the net at 71:17 off an assist from Mike Desiderio to make it 3-2. From there, the Zips defense buckled down to secure the berth in Sunday’s championship game.

The Mountaineers outshot Akron for the game, 15-13, including 9-5 on goal. Fenlason finished the game with seven saves for the Zips.