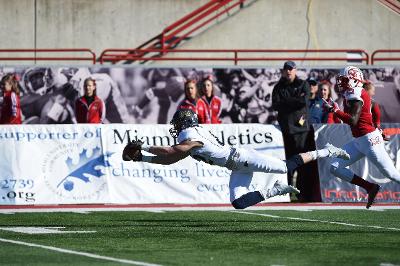 Austin Wolf dives for the Thomas Woodson pass against the RedHawks.

The University of Akron’s football team ran out to a 27-7 halftime lead, watched as the Miami of Ohio RedHawks battled back, but then hung on for the 37-28 win in Oxford, Ohio at Yager stadium Saturday afternoon.

The Zips’ Robert Stein sealed with victory by kicking a 50 yard field goal with less than three minutes to play.  The win moves Akron to 5-5 overall (3-3 MAC), while the RedHawks fell to 2-9 overall (1-6 MAC).

Akron’s offense clicked this afternoon and piled up 432 yards, including 211 yards on the ground. Conor Hundley ran for 110 yards and a career-high three scores. Hundley, from nearby Hamilton, Ohio, was playing before a huge hometown crowd.

Thomas Woodson went 13-of-28 for 221 yards. Wide out Imani Davis hauled in seven catches for 64 yards, while Jerome Lane had four receptions for 83 yards and a touchdown.

Defensively, Jatavis Brown continued his fine season with a game-high 11 tackles, 4.5 tackles for loss, two sacks, an interceptions, and a forced fumble.

The Zips put points up first in the opening quarter. Woodson hit Lane for 27 yards, followed that with a nine-yard reception by Davis, and a 19-yard rush by Hundley. But on fourth-and-six from the 32, head coach Terry Bowden decided to go for it. The decision paid off as Woodson connected with Lane in the end zone for a 32-yard touchdown reception.

The RedHawks tied the game at 7-7 following a five-play, 84-yard drive as QB Gus Ragland, one of four used by the hosts on the day, hit WR Chris Hudson with a 16-yard pass.

With time running out in the first quarter, Akron took the lead, 14-7, as Hundley rushed right up the middle for nine yards into the end zone.

After a failed attempt by the RedHawks to go for it on fourth down from the Akron 35, Woodson ran for 21 yards. Woodson then flung a 40-yard pass that Austin Wolf made a spectacular diving catch on and Cody Grice capped off the drive with a two-yard rumble into the end zone to give Akron the 21-7 lead with just over five minutes to play in the half.

The defense came up big on Miami’s next drive; Brown forced a fumble, recovered by Jamal Marcus, giving the Zips the ball on the 16-yard line. Just two plays later, Hundley barreled in from four yards out and another Akron touchdown. A bobbled snap foiled the extra point, but the Zips led, 27-7.

Akron had another chance before the half and Zach Guiser recovered a RedHawk fumble. The Zips moved the ball down to the 25 with four seconds on the clock. Stein attempted a 42-yard field goal which went wide right.

On the opening drive of the third quarter, Brown intercepted a Billy Bahl pass, the first interception of his collegiate career. After Hundley ran the ball nine yards for the score, it looked as if the Zips were comfortable with a 34-7 lead.

Then Miami scored two touchdowns within a minute in the fourth quarter as Bahl connected on another pass for a touchdown and then the RedHawks intercepted a Woodson pass for a pick six. All of a sudden it was 34-28 Akron with 8:37 left in the game.

Early in the fourth, the RedHawks blocked a Zack Paul punt for the second time in the game.

After the Miami touchdown that left the score 34-28, each team had three-and-out possessions. Akron ended up with the ball on their 37 with 5:58 still left in the game.

Woodson hit Davis with a 16-yard pass on third-and-six to the RedHawk 43 and a pair of Hundley runs took the ball to the 28. A false start penalty on the Zips moved the ball back to the 33.

After three more runs netted no yards, coach Bowden called on Stein who nailed the 50 yarder with 2:45 left to seal the game for the Zips.