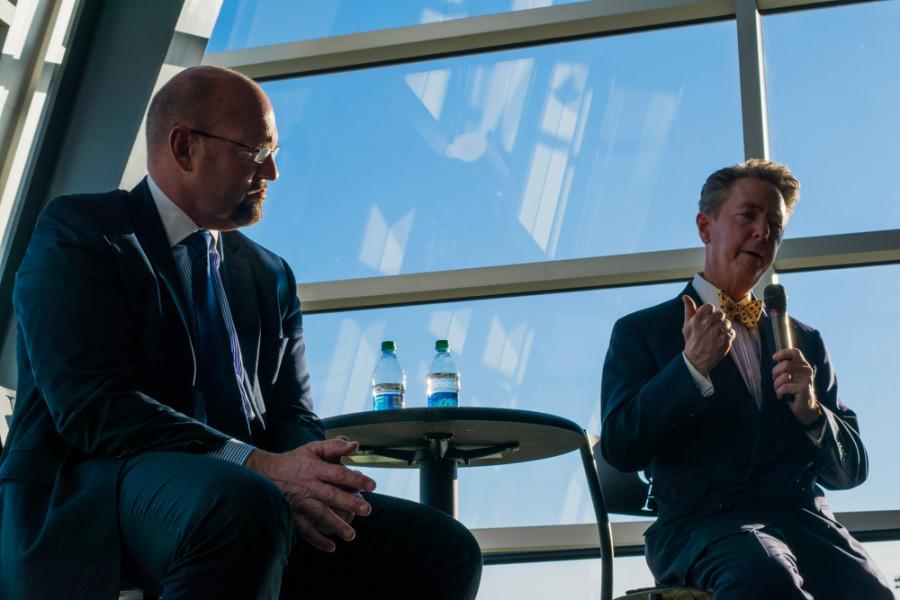 At the third meeting in the Undergraduate Student Government’s Town Hall series, students picked up the microphone to hurl questions — directly, this time — at UA Vice President of Advancement Larry Burns and new Director of Athletics Lawrence Williams.

“It makes it hard for [administrators] to ignore you when you’re standing right there with a microphone in your hand,” said UA senior Cassandra Durell.

Durell was among nearly 50 UA students sitting in the Student Union Starbucks yesterday, Nov. 16, to hear Burns and Williams answer a series of questions on rebranding, the future of Success Coaches, the athletics budget, administrative pay cuts, and the possibility of concealed carry on campus.

USG collected students’ questions via text messages, twitter, and a microphone passed around by Chief Justice Garrett Scherba, which was a marked difference from previous Town Halls, where students could only text in their questions to the moderator.

USG President Taylor Swift, who moderated the event, opened with a moment of silence for the victims of the Nov. 13 Paris terrorist attacks.

Minutes after, students brought up the recent rebranding of UA to “Ohio’s Polytechnic University.” Burns responded by saying that rebranding is a means of delivering a message or a promise. He went on to say that the university wants to continue to tell the story of its great programs, students, and faculty by using its brand to attract new students.

Halfway through the forum, sophomore Dee McCall, who had given a speech 30 minutes before during a “Black Lives Matter” rally outside the Union, asked Burns and Williams how the university could pay for a new advertising campaign while simultaneously cutting programs — namely the Multicultural Center — that improve minority retention rates.

Burns said retention rates for students overall are on the upswing. He expressed optimism that the success coaches who were hired at the beginning of the academic year would allow the University to reach at-risk students and enable them to find the help they need.

Williams addressed a similar question on how the recent events at the University of Missouri have expanded the role of athletes as student leaders.

“It underscores…. [that] by virtue of the sport that one plays, there are often student athletes that have a very commanding voice,” Williams said. “I would hope that our student athletes here at Akron also watched  [the events at Missouri] closely and had in their toolkit the same concept and commitment to their obligations and responsibilities that come with the positions they have.”

Students also asked whether or not the university would continue with its $800,000 success coach program, given recent news that Thomas Roulston, founder of Trust Navigator — the nonprofit that provides the success coaches — is facing allegations of fraud against his investment company.

“To answer— yes,” Burns replied. “The relationship we have with Trust Navigator is a separate entity from what those other companies are, it is something we’re aware of, it’s something we’re watching closely as that legal process continues; but most importantly, we [will] continue to work with [the success coaches] every day to make sure there’s no cause to be concerned. We will adjust accordingly.”

Afterward, a question was raised concerning the efforts that the university was making to capitalize on the success of the soccer program in terms of marketing,  media, and student outreach.

Noting the “fire” that the AK-ROWDIES provide, Williams said they “actually [do] affect the outcome of games.” He went on to note a good student turnout, and the community that recognizes that energy.

“I would say that we are among the top five to 10 in the nation in attendance, and we have a great head start, and it’s something we are going to look to build on in this year and years to come,” Williams said.

In the last few minutes of the forum, Burns curtly addressed both the possibility of concealed carry on campus as well as future administrative pay cuts.

While Burns said it was possible to “sit down and discuss allowing concealed carry” on campus, he noted that, to his knowledge, no administrative pay cuts had been discussed.

In contrast to the last Town Hall meeting — which featured President Scarborough — Isaac Lampner, USG senate’s facilities and services chair, said that Burns and Williams did not receive a list of questions in advance.

UA senior Cassandra Durell, in a question posed to Burns about bridging the gap between administrators and students, asked how UA’s administration could provide students with a real voice, and “not just the pseudo-voice of the student government.”

After the event, Durell said that the moderator altered the question she had texted in. “I don’t feel that it’s fair for them to change my question so they can provide a more cookie-cutter answer,” she said. “It gives them an opportunity to sugarcoat it and spin it the way they want to.”

Meanwhile Darnell Davis, one of the two UA student trustees, praised the event. “I think that it’s essential that Town Hall meetings happen,” he said, calling it a “step in the right direction.” He went on to stress the importance of having a dialogue between students and administrators.

Davis also voiced his opinion on the replies Burns and Williams gave during the forum.

“I think [Burns and Williams] answered the questions to the best of their abilities,” Davis said, noting that many of the questions were not geared toward their departments.

Kelsey Watson, a UA senior who has frequently demonstrated and spoken out against the UA administration in the past few months, said the meeting was good for student involvement, but that the answers were lackluster.