More than 120 gather in support of University of Missouri students 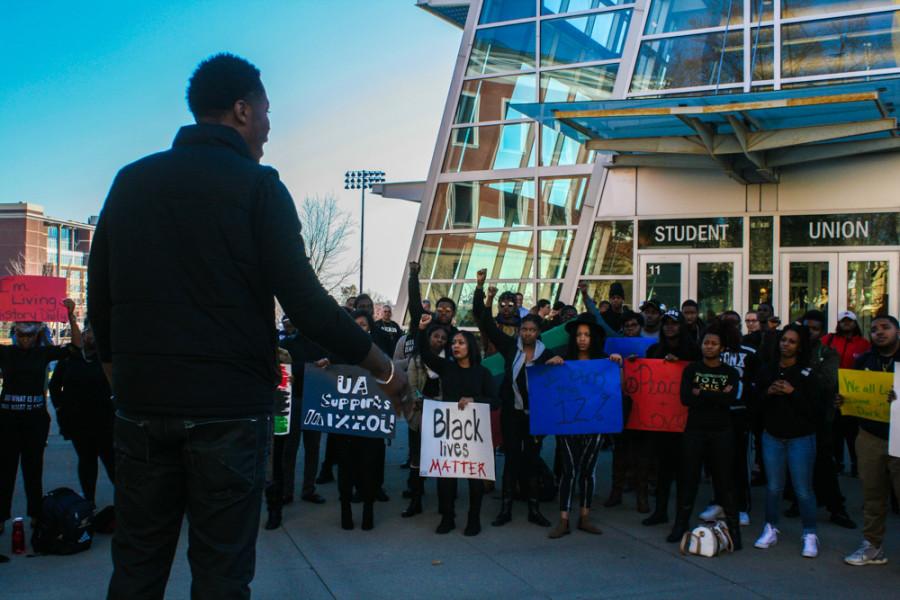 UA senior Eric Leak gives a speech in front of the Student Union.

More than 120 students, most of them black, gathered outside the Student Union Starbucks entrance yesterday to voice their support for happenings at the University of Missouri (Mizzou), and address concerns over similar — but not as severe — conditions at The University of Akron.

“Fuck racism,” they repeatedly chanted, holding signs and posters and fists in the air.

Mizzou has recently become a symbol for racial tensions on U.S. college campuses. Only last week, the school’s president and chancellor stepped down after claims of inaction regarding race relations on the part of school leaders.

“As a black organization at another PWI [predominantly white institution], it’s our obligation to speak on behalf of what’s happening at Missouri, and let students know that they have support here,” said Angel Poole, organizer of yesterday’s rally and president of Black Students United, a social equality group on campus.

Poole and a few others began putting the rally together last Thursday night, creating fliers, sharing on social media, and working with Student Union Director Anne Bruno to make sure their demonstration would be not only safe, but effective.

Many students read poems, led chants, and gave varying speeches on racial discrimination and inequality. All were welcome to stand up in front of the crowd and give their own speech, and many did.

One such student, Dee McCall, gave a recap of what she came to the rally to say.

“I just said all lives matter,” McCall said. “You know black lives matter, but I wanted to convince black people that [all lives do].”

McCall, who is in the military, said she identifies herself as an American more than anything else, and is greatly affected by what’s going on in Paris and other parts of the world.

Poole, however, said her “biggest issue is when people say all lives matter.”

“That’s so cliche,” she added. “We all know all lives matter. But when black lives are being put in this situation daily across the nation, that is an issue.”

Poole said her main points of concern at UA are the rates of graduation for black students, which are much lower than other races on campus and black student rates at different universities in Ohio.

Chase Neff, a white student, stood behind the crowd at the rally, watching on as a few of his black friends got up and spoke.

“It’s pretty moving,” Neff said about the demonstration. “I haven’t seen very many [incidents] here, but I think this problem goes deeper than Missouri. There’s something going on in the air, and I can’t really put it into words.”

Near 3 p.m., the students moved from outside the Union doors to inside, where UA Student Trustee Darnell Davis — who also participated in the rally — encouraged them to stick around and attend USG’s Town Hall meeting featuring Athletic Director Lawrence Williams and Vice President for Advancement Larry Burns.

Burns, who was not able to see the demonstration outside because of a meeting, said he has only heard about it the day before on Twitter, but that “protests and demonstrations are part of the college campus to get the word out on things that concern people.”

“So hopefully it was successful in doing that,” Burns said.