Football gears up for big game with Buffalo 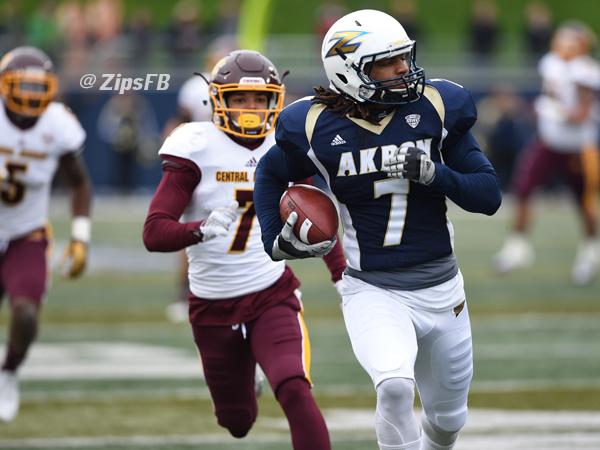 Jerome Lane runs for the end zone against Central Michigan

With two games remaining, the Zips are just one victory away from becoming bowl eligible. Akron jumped to Division I-A play (FBS) in 1987 and has appeared in just one bowl game– the 2005 Motor City Bowl.

With the five victories, the Zips have now equaled the combined wins from 2013 and 2014.

This season Conor Hundley is the team’s top ball carrier with 761 yards and nine touchdowns on 157 carries. At the quarterback position, Thomas Woodson leads with 119-of-229 for 1,636 yards and 11 touchdowns. Imani Davis, with 39 catches for 475 yards and two touchdowns and Jerome Lane, with 26 catches for 595 yards and six touchdowns, anchor the receiving corp.

The Bulls are led by Jordan Johnson who has 701 yards and nine touchdowns on 143 carries. Quarterback Joe Licata is 229-of-358 for 2,420 yards and 14 touchdowns. Matt Weiser is the top receiver with 53 catches for 514 yards and two touchdowns from the tight end position.

This is the 15th meeting between Akron and Buffalo in series history, which began in 1999. The Zips lead, 9-5, all in MAC play.

Last year, Buffalo cruised to a 55-24 win over Akron at UB Stadium.

Over 10 games this season, Akron is a perfect 4-0 when leading at the half.

Akron closes out the regular season with bitter rival Kent State on Black FryeDay, Nov. 27, at noon. The day will also be celebrated as Senior Day and former Zips’ quarterback Charlie Frye will be put into the Ring of Honor.