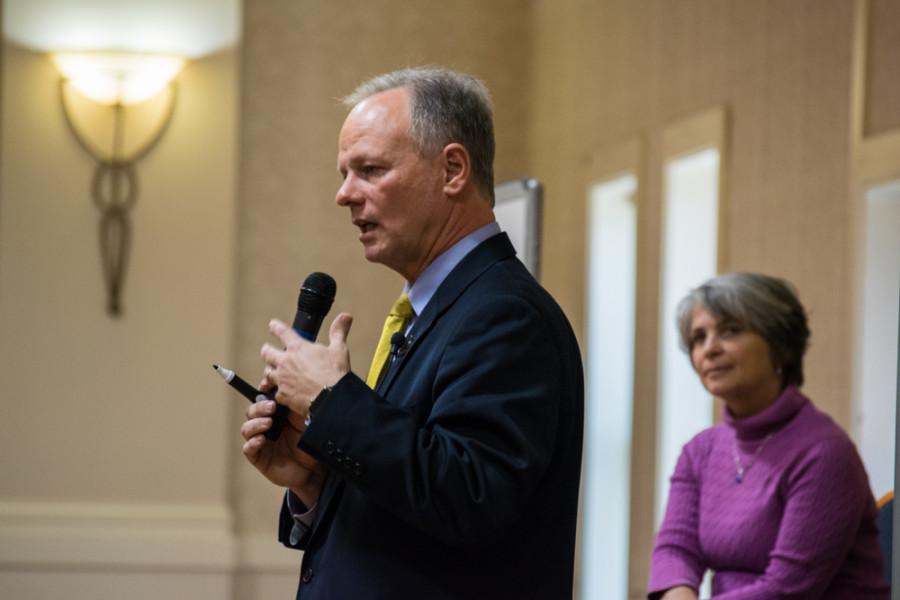 President Scott Scarborough at the Nov. 18 Akron Press Club luncheon. Emcee M.L. Schultze of WKSU-FM is in the background. 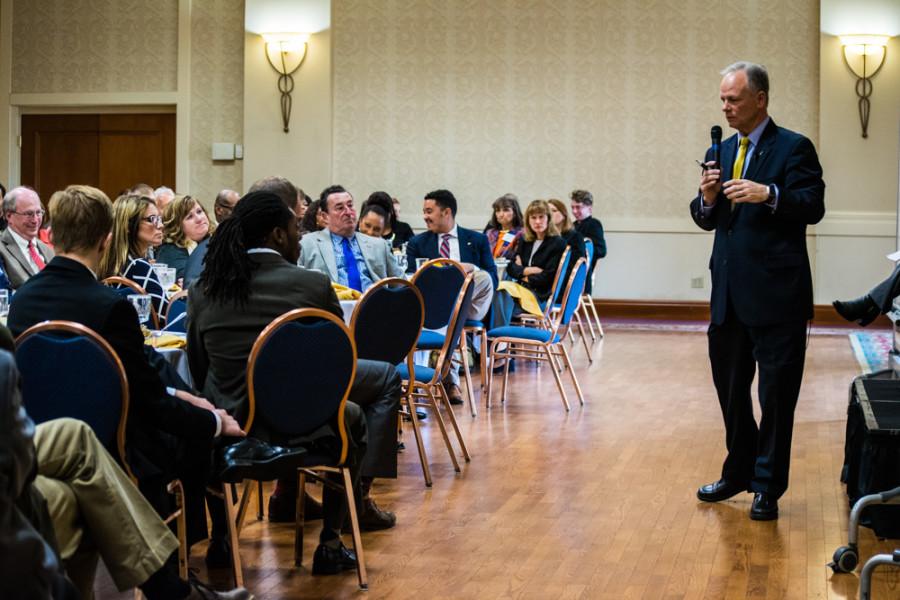 Scarborough began by saying he’s given four major speeches during his time at UA. Instead of giving a fifth major speech, he wanted to do what he’d do in normal meetings with faculty, staff, or students by letting them propose topics which he would then address. Afterward, he would take audience questions from the moderator, M.L. Schultze of WKSU.

Scarborough explained UA’s “context” before addressing the topics, reiterating many familiar points he has made in previous speeches: UA is carrying $500 million in debt; pays a 7.3% rate to pay off that debt; getting smaller is not an option; UA must become a national university; all the changes in the last few months have been for that goal.

Soon after Scarborough addressed admissions, saying part of the problem with falling enrollment is that UA has recently increased its admission standards.

But later, the moderator posed a question that said the law school’s numbers were increased by admitting weaker students, that required ACT scores for the Honors College were dropped from 27 to 25, and GPA requirements for international students were dropped from 2.5 to 2.

Scarborough said he had never heard about such a situation in the law school, but praised it for its increased enrollment this year.  He confirmed the Honors College ACT requirements were lowered, but added that those students’ GPAs must be higher to make up for the difference. And he did not know about the international student standards.

Jane Bond, a retired Common Pleas judge in Summit County and former UA Board member, later said it was her question, and that she had received the information from staff in UA’s admissions offices.

The topic of tenured faculty was also brought up. Scarborough cited downward trends of tenured-faculty across the country to explain UA’s situation, adding that it’s a “funding issue” that prevents the hiring of more.

In regard to assistantships, Scarborough said when they are done at such high rates, the University does not receive enough revenue, and that’s why they must be cut back at UA. He said doctoral assistantship cuts are not being considered.

Scarborough said the “grand entrance” was part of a campus master plan, but did not say whether it was happening.

“If we were to ever do something like a new entrance to the University,” Scarborough said, “more than likely it would be through donor funds or other discretionary funds, not state capital, and not likely bonded indebtedness.”

“Bonded indebtedness” is a euphemism for borrowing money that must be paid back.

He added there are “major issues” both outside and inside the Polsky Building, which is cause for renovations; no details were given.

Regarding rebranding as “Ohio’s Polytechnic University,” Scarborough admitted the “community has responded unfavorably,” but gave familiar reasons why he found it necessary. He did say, however, the rebranding has multiple “phases,” of which UA has only completed the first one. He gave no details.

Scarborough did not respond directly to a question about how the tuition would be funded for students in the Lebron James Family Foundation program at UA, but left the answer ambiguous.

In regard to the high pricetag of administrative salaries, especially in contrast with the low wages of adjunct and other professors, Scarborough said they are determined by supply-and-demand market conditions. He also deferred a question about why he received no bonus this year to the Board of Trustees.

The question of fees on higher-level courses is being reconsidered as well. This was the case for a short time over summer, but quickly the decision was rescinded on account of the Ohio state legislature. Now, Scarborough said, “we’re working with students to redesign what we need to do at the fee level to put it back into the purview of the Board of Trustees.”

Lastly but not least among topics discussed was the possible vote of no confidence coming from UA’s Faculty Senate, to which Scarborough said that such votes are becoming more common across the country in higher education.

Many prominent community members attended the speech, and gave their thoughts afterward.

“I was very glad that he came to this forum, but I don’t think he used the opportunity to substantively address the issues,” said Jane Bond. “And he doesn’t hold himself accountable for any of the problems that have occurred. The audience deserves better than that.”

“It sounds like he has heard all of these questions before and was ready for them,” said Akron Press Club member Ron Kirskey. “I’m wondering if [UA] has the right mission. It sounds like they’re only trying to do things because other universities do them.

UA donor Sharon Gandee, whose husband Bob is a UA alumnus and retired faculty member, expressed her discontent by saying “they have gotten no money from us, they will get none this year, and they are going out of the will if that fellow [Scarborough] sticks around.”

UA Board Chair Jonathan Pavloff was pleased with both the audience’s questions and Scarborough’s responses.

“I thought it was a structured and very positive event. I thought Scarborough was very courageous to take questions from all areas without regard for subject and give his best answer,” Pavloff said. “The more we are able to interact with one another, the better the outcome will be.”

Kristina Aiad-Toss contributed to this article.