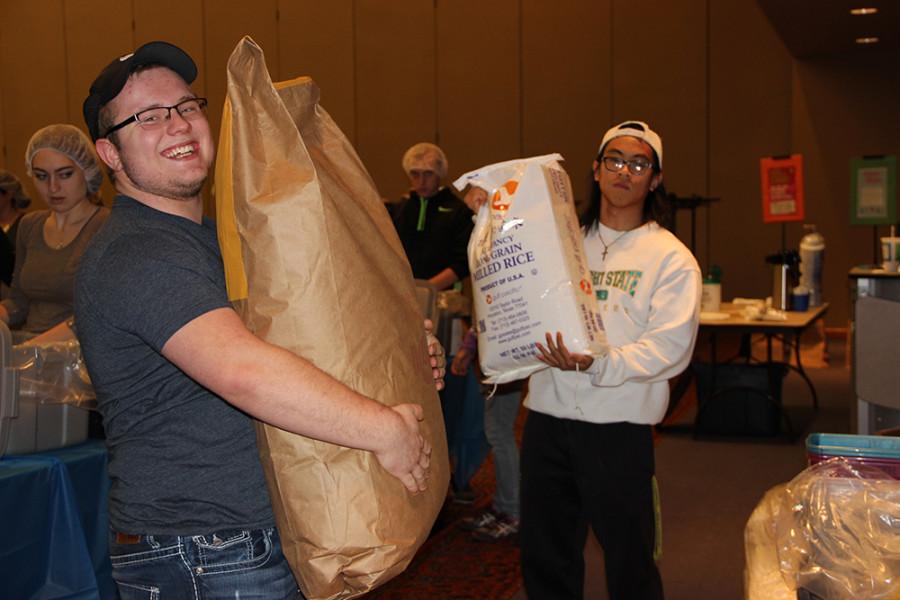 Volunteers package meals for the homeless

By Paul Clifford and Sofia Syed

Financially supporting oneself can be a challenge — people may turn to the government for help, but is it really enough?

One in seven individuals in the Akron-Canton area is food insecure, meaning they lack regular access to safe and nutritious food, according to Akron-Canton Regional Foodbank.

Serve Akron, a civic engagement program at the University of Akron, wanted to raise awareness of this growing epidemic with Hunger and Homelessness week, held from Nov 15. until Nov. 21

During the entire week, students, staff and  faculty can  bring in canned food  that will be donated to the Akron-Canton Foodbank. Serve Akron is also allowing individuals to participate in the SNAP challenge (supplemental nutrition assistance program) all week long. This challenge allows participants to live like a low-income American by relying on $4.50 a day for the entire week.

To start of the week, on Nov. 15, the Student Union theatre showed The Pursuit of Happiness to share the story of a single father’s struggle who was evicted and works to turn his life around.

Monday, Nov. 16, began the series of the drop-in service projects Participants could make fleece scarves that would be donated to a local shelter. On Monday evening, ZPN and Serve Akron held an All in for Hunger event, which allowed students to exchange canned good for a raffle ticket to win money.

On Tuesday, Nov. 17, another drop-in service was held; participants could decorate lunch bags which would then be filled with food and distributed to homeless shelters.

Additionally on Tuesday, Serve Akron gathered a flock of volunteers to help package meals to be sent to disadvantaged people in developing nations abroad with their Stop Hunger Now event.

Several long tables were organized in the Student Union ballroom with all the stations necessary to measure and portion the mix of rice, soy protein, and other vitamins into airtight bags, with the production line ending with all the boxes the meals were packaged into.

A gong sounded, which was answered with rounds of applause. Each time a thousand meals were assembled. And after 10 chimes, the event was over, for a total of 10,000 meals.

Dina Daltorio, graduate assistant for Serve Akron, has been involved in service ever since high school. Having earned an undergraduate minor in Nonprofit Leadership, she feels drawn to serving others and hopes that through her position at Serve Akron she can show how good it is to help others and how satisfying that can feel.

She explained that events like these are a great opportunity to become more aware of these issues that affect so many people every day of their lives.

“Doing these types of things [is important], even though it’s little, even though you’re just scooping a cup of rice, makes you appreciate what you have and what you can do for others,” Daltorio explained. “It’s simple, it’s the little things that count.”

On Wednesday, Nov. 18, individuals could participate in another drop in service of making fleece blankets for homeless shelters. An interactive simulation of poverty Hunger Dinner was held later in the evening. Guests were assigned an identity of either a high or low income individual and be provided meals according to their financial status.

A drop-in service and Thankful Thursday event will be held on Thursday, Nov. 19  from 11 a.m. until 2 p.m. in the second floor lounge of the SU. Additionally on Thursday, there will be a post SNAP challenge reflection from 6 p.m. until 8 p.m. in SU room 314.

On Friday, Nov. 20, there will be a can castle competition held in the SU lounge from 10 a.m. until 12 p.m. Participants will build art entirely out of non-perishable food items that will be then donated to the Akron-Canton foodbank.

From 1 p.m. until 3 p.m., students, faculty, and staff can volunteer at the homeless shelter, Haven of Rest.

To finish up the week of hunger and homeless awareness, there will be a Super Service Saturday event from 8:30 a.m. until 11:30 a.m. at the Akron-Canton Foodbank. For those who wish to participate, be in the SU at 8 a.m.

To participate in any events happening on Thursday, Friday or Saturday, R.S.V.P. at uakron.edu/hunger/.