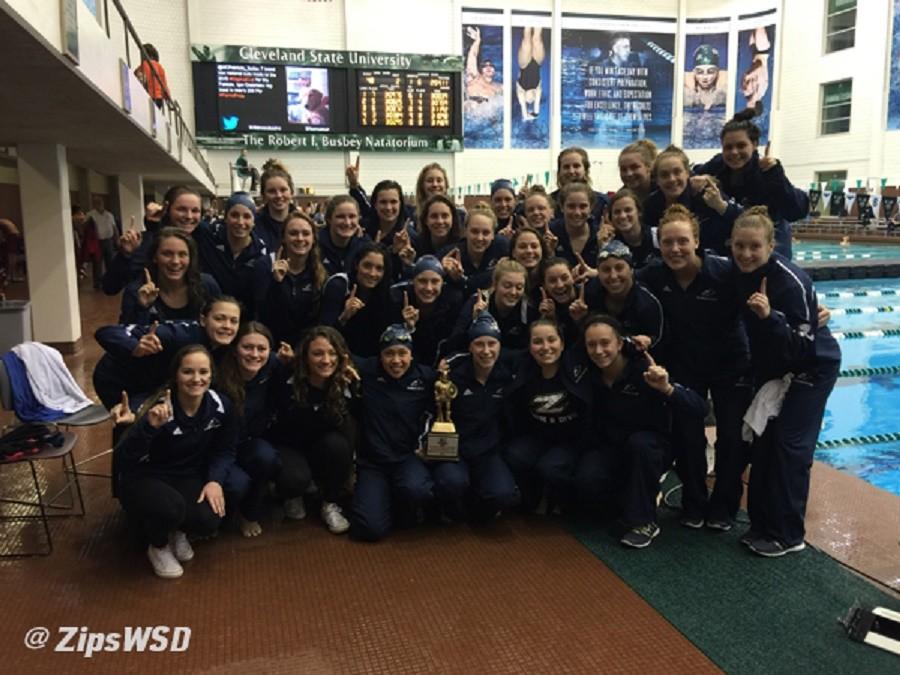 The University of Akron swimming and diving team took home first place this past weekend at the Magnus Cup Invitational at Cleveland State University in the Robert F. Busbey Natatorium. It is the first time that the Zips have ever finished the three-day event by earning the Magnus Cup.

“Congratulations to our ladies on their efforts this weekend. It was a lot of fun having a battle for the Magnus Cup Trophy,” said head coach Brian Peresie. “I am very proud of how they handled the peaks and valleys of a championship format invitational. We dove tough, we raced tough, and we kept pushing through the very last event.When it is all said and done, we learned more about each other and will use that information to make us better the next time out.”

The Zips ended the first day of the competition in second place, but found its way to the top spot on Saturday. Akron finished the weekend with a strong showing on the final day, capturing seven first places out of nine events.

Highlights from the weekend include:

Ragen Engel, Susan Franz, Hannah Raspopovich, and Sadie Fazekas swam the relay in the third fastest time in program history (1:32.05). The squad’s time also ranks as the 12th fastest time in the NCAA this year.

Engel and Raspopovich capped off Friday with second- and third-place finishes in the 50 freestyle event. Engel had a second-place finish with a 23.26, which is the third-fastest time in program history and Raspopovich was a close .08 seconds behind, touching in at 23.34.

Laura Savariau, Raspopovich, Fazekas, and Ashley Niznik tallied the Zips final first place finish of the day in the 400 medley relay. The quartet clocked in at 3:44.68, finding themselves with the fourth-fastest time in the program and the 15th fastest in the NCAA in 2015.

Seiler now holds the fastest time in the 100 butterfly at Busbey Natatorium with a time of 54.19. She now also holds the second-fastest time in program history and her time puts her 19th in the NCAA.

Szynal and Myers claimed the top two positions in the 100 backstroke. Szynal posted the fourth-fastest time in the program (54.30). Myers’ time of 54.56 also enters the top 10 times of the program at number five.

Finally, on Sunday in the B final of the 200 backstroke, Savariau broke the Busbey Natatorium pool record (2:00.11) by two seconds, finishing in a time of 1:58.98. Minutes later, Szynal bested her record with a time of 1:55.52, three seconds faster than Savariau’s for first place. Their times both put them in the record books of the Akron program at second and sixth, respectively. Sznyal’s time is now also the ninth-fastest in the NCAA.

Seiler bested the Cleveland State pool record in the 200 butterfly with a first place finish in a time of 1:59.57. Seiler’s time is the second-fastest time in the program, .31 seconds behind the time she set a year ago.

And to conclude the invitational, the Zips grabbed first and third place in the 400 freestyle relay. The foursome of Engel, Fazekas, Raspopovich and Myers set a new pool record with their time of 3:21.28, the 10th fastest time in the NCAA.

The Akron swimming and diving team are off until Dec. 4, as they host the annual Zippy Invitational at the Ocasek Natatorium.

In the air rifle competition, Akron shot a combined team score of 2,313 and then a 2,299 in the small-bore event.

Zachary Strohl was the top marksman in the air rifle event with a score of 586, while Caleb Lloyd posted the second highest score for the Zips with a 580.

Akron’s top sharpshooter in the small-bore competition was Lloyd who shot a 580, followed by Julia Hatch who shot one point lower with a 579. Strohl rounded out the Zips top-three competitors by recording a 572.

The Zips are off until Jan. 17, when they head to Morgantown, West Virginia to take on the top-ranked West Virginia Mountaineers.