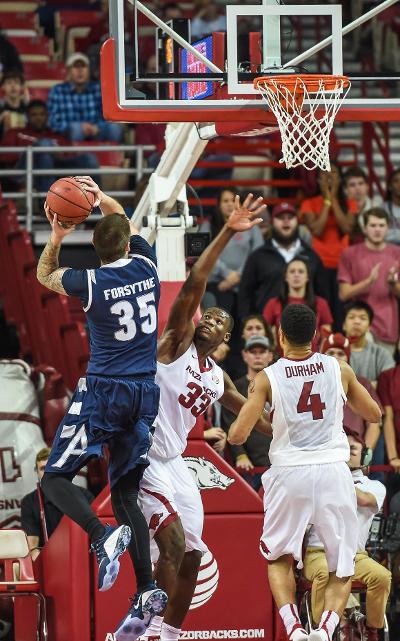 Pat Forsythe heads to the basket against Arkansas.

The University of Akron men’s basketball dropped a 75-56 decision to the No. 11 Villanova Wildcats on Sunday afternoon at The Pavilion in Villanova, Pa. This game was the second of four for the Zips as part of the 2015 NIT Season Tip-Off.

Akron began the game with good shooting and defense. The Zips had an eight-point lead (13-5) at the first media timeout near the 15-minute mark. Baskets by five different players showed good team play to start the contest.

Cheatham, Jr. started the game with a three-point shot; Jake Kretzer a layup. Jackson and McAdams added long distance bombs of their own, and Williams capped off the rally with a jumper.

Meanwhile, the defense limited the Wildcats to just 1-of-9 shooting.

Akron controlled the game and still led 26-20 with just over seven minutes to go in the first half. Then the Wildcats found their range, and the Zips cooled off.

Villanova closed the gap, finishing the first half on a 9-0 run to hold a 38-31 advantage at the break. Akron was held scoreless the last 4:02 after Cheatham hit a layup.

The second half was not much better as the Wildcats started with a 9-1 run that stretched their lead to 47-32 with 16:29 left in the game.

“We didn’t play well enough to win the game,” head coach Keith Dambrot said. “They can spread out, shoot the three and drive the ball. We missed some shots around the rim at the end of the half, which gave them life and allowed them to take the lead. We could have been up at halftime, and I think that may have affected us a little bit.”