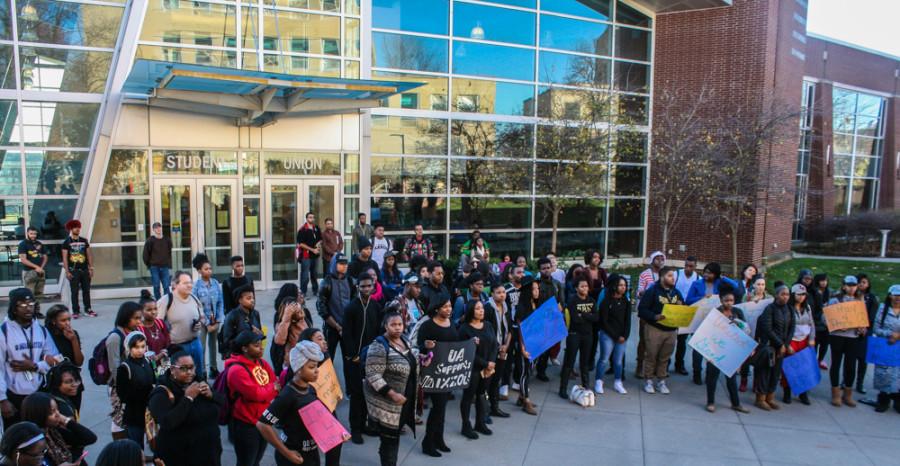 The Black Students United rally was held on Monday, Nov. 16, outside of the Union.

Last week, The Buchtelite published a story about UA Black Students United’s rally in support of the protesters’ cause at the University of Missouri (Mizzou), held on Nov. 16 outside of the Student Union entrance doors near Starbucks.

The rally story appeared on the top of the front page of The Buchtelite’s Nov. 17 issue, under the headline of “F*ck racism, they chanted,” with a headline deck of “More than 120 gather in support of University of Missouri students.”

Some found fault with such a headline, including the rally’s organizer Angel Poole, who is also the president of Black Students United. Her guest column appears on page A2, and represents the opinions of those who disagreed with the way the rally’s headline was written.

After hearing grievances from other black student leaders, The Buchtelite invited Poole, Christian Howse, and Darnell Davis into the office to express their concerns. Howse is an Undergraduate Student Government senator and chief executive officer of of The Black Excellence Commission at UA. Davis is one of UA’s non-voting student trustees.

They found the article itself to be an adequate representation of the rally, but not its headline, saying it misrepresented the rally’s meaning, spirit, and mood.

Some days later, Poole also gave her more general thoughts on the way that black people and racial events are portrayed in media, saying that there is often a disconnect between what people perceive black movements to be, and what they really are.

“The media sometimes does a great job and sometimes it just misinterprets the whole entire message,” Poole said, “especially when it comes down to the Black Lives Matter movement and the black movements in general.”

Poole also gave her thoughts on why this might be the case, referencing a historically omnipresent stereotype against black people.

“Blacks were always put into this category of being angry and unsatisfied and ready to fight, almost,” Poole said. “So I think historically we have this stereotype of being negative and angry, which is false. A lot of these movements — a lot of the stereotypes about [them] were completely off and completely wrong and went against what the movements were doing.”

Rallies, protests, and demonstrations regarding racial issues have been breaking out all over the country recently, most conspicuously at Mizzou and Yale University.

Mizzou’s Chancellor Richard Loftin and President Tim Wolfe resigned as a result of their perceived lack of response after a series of racist incidents on campus. Exhorting their removal was Mizzou senior Jonathan Butler, who refused to eat until Wolfe stepped down.

Soon after Butler announced his hunger strike — and set up a tent in the middle of Mizzou’s central campus quad — the football team backed him with support of its coach, refusing to play another game until the president resigned.

The University’s Board of Curators subsequently named Mike Middleton, the third black student to ever graduate from Mizzou’s law school, as interim president. Chancellor Loftin stepped down to a research position.

A different sequence of events played out at Yale, beginning with an administrative email sent to students before Halloween urging them to be cautious with their costumes, and to avoid basing them on race or ethnicity so as not to offend.

Erika Christakis, an associate master of one of Yale’s residential colleges, sent an email to students in response, advising them to dress how they want, and not lay undue stress on being inoffensive.

In consequence, many students were angry at Christakis, her husband Nicholas Christakis — master of the same residential college — and other administrators, whom students perceived as making Yale inhospitable to students of varying races by failing to address and rectify racial tensions. This led to many protests and demonstrations.