An art event for everyone 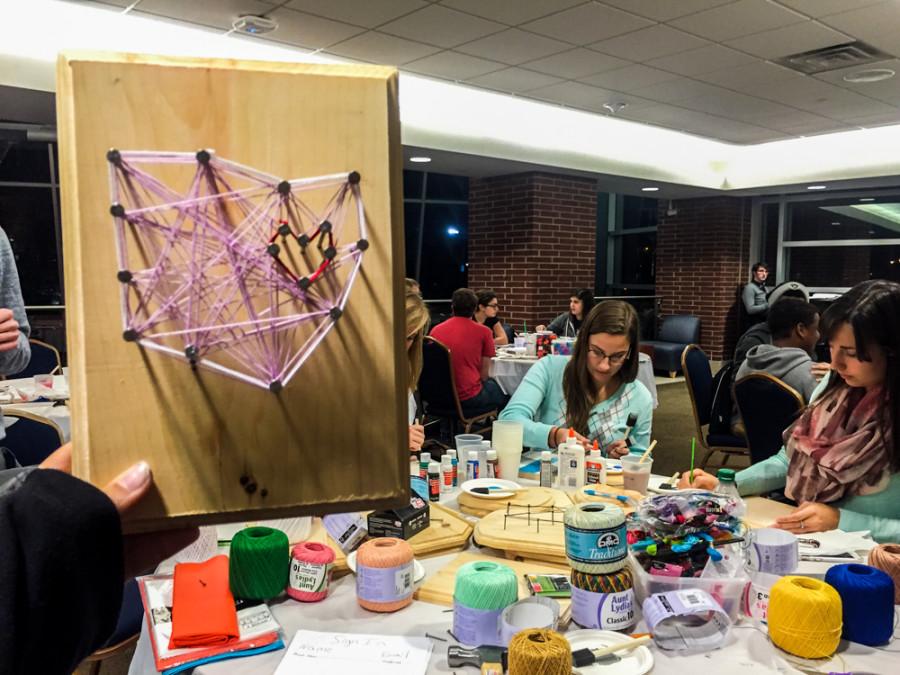 Students make the state of Ohio out of string for ZPN's art series.

Although political science major Wyatt Nolker isn’t pursuing an art degree, he understands the importance of art and wants to share that with the rest of UA’s campus.

On Nov. 19, students gathered at Nolker’s event in the Student Union Starbucks lounge to learn more about art and participate by creating individual pieces. Nolker is the fine art, film, and lecture chair of the Zips Programming Network.

There were four stations with unique projects to work on in the cluster of tables, students and art supplies.

Accompanying these activities were other art-related clubs that were encouraged to occupy other tables so they could inform students about their organizations and spark interest in future events.

Notably attending were the Akron Animation Association and the Culinary Artist Club, the latter showing off carefully-carved designs of melons, pumpkins vegetables, and other common foods.

Nolker later explained his role on the executive board of ZPN. Along with planning lectures and choosing which movies to play in the SU Theater, Nolker organizes four art-related events each semester.

One of the more successful events took place earlier this semester in September, when Nolker brought in a Henna tattoo artist to teach students the history and techniques of Henna art. The artist gave out about 40 free tattoos to students.

Another event held in October saw several students draw their favorite comic characters, superheroes, and supervillains. These impressions were then displayed in the piano lounge for other students to enjoy.

Nolker also discussed the goal of these events, and how he wants to help promote the arts at UA. There were many students getting involved with the event and having fun, but he feels that the system for outreach of these events isn’t where it needs to be.

To learn about the next art event or other activities occurring in the future, visit uakron.edu/studentlife/zpn.