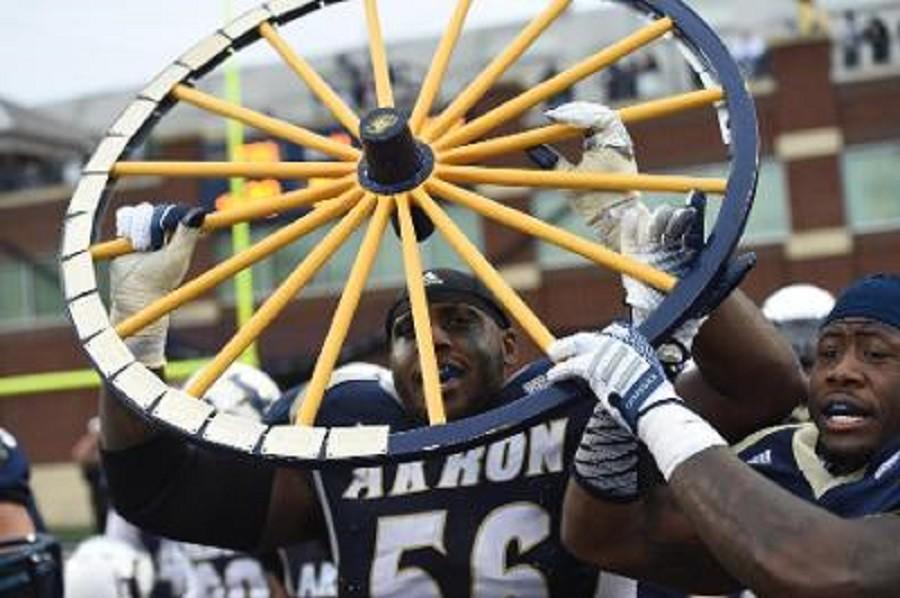 The University of Akron football defense played its best game of the year as the Zips defeated the Kent State Golden Flashes 20-0 in a Mid-American Conference game and reclaimed the Wagon Wheel Friday afternoon at InfoCision Stadium – Summa Field.

In his last home game as a Zip, Jatavis Brown led Akron (7-5, 5-3 MAC) with eight tackles and forced fumble.  Se’Von Pittman had a sack, and recovered a fumble to help the defense to its first shutout of Kent since 1985 and since 1992 over any team. The seven wins are the most for a Zips’ team since 2005, tying the program’s FBS record of wins in a season.

Kent  (5-7, 3-5 MAC)looked as if they would hit the scoreboard first after the opening kickoff as on the second play from scrimmage Kent quarterback George Bollas found James Raekwon wide open down the middle for a 45-yard gain to the Akron 34 yard line.

Later in that drive on third down from the Zips’ 14 yard line, the defense made its presence known as Bollas completed a screen to Matt Bahr who coughed up the ball when hit by Brown. Bryce Cheek made the recovery for the Zips.

Akron put together a drive that started with 7:08 to play in the opening quarter, and concluded with a seven yard rushing touchdown by Conor Hundley with 25 second left in the quarter. The 14-play, 76 yard drive included a fourth and one from the Kent 27 that Cody Grice was able to convert with a four yard run and a defensive holding on third at 11 from the Kent 17.

In the second stanza, Akron drove to the Flashes 20 yard line, highlighted by a 29 yard run by Woodson, but Robert Stein missed on a 37-yard field goal attempt with just over six minutes to play in the half.

After the Stein miss, the defense stood tall including a sack by Pittman, forcing Kent to punt from its own end zone. That should have given the Zips great field position, but after a 60-yard punt by Kent’s Anthony Melchiori, a return of minus seven yards and a block in the back penalty, Akron ended up with the ball at their own 14 yard line.

“We can’t be missing opportunities like that, but our defense got a big play right after that to pick us up,” head coach Terry Bowden said.

After a short two yard run by Hundley, Woodson found Jerome Lane down the left sideline for 37 yards. The crowd thought it was a touchdown play of 86 yards, but officials ruled that Lane barely stepped out at the Kent 47 yard line.

The Zips could not covert the big play into any points and gave the Flashes the ball back by a punt to the 5 yard line with 1:56 to go before the intermission.

The defense once again came up big with Kent facing a third and nine yards to go from the their own six, Darryl Monroe caused Bollas to fumble and Pittman recovered at the Flashes’ 11 yard line with 52 seconds left in the half.

Woodson found Newman Williams on the first play for the touchdown and a 14-0 Zips halftime lead.

Akron took the second half kickoff and marched down the field to the Kent 11 yard line, but back to back holding calls and a third penalty for delay of game against the Zips pushed the ball back to the 36. With the Zips facing a third and 29 from the 33 yard line, the Golden Flashes were called for a pass interference giving Akron the ball at the 18 with a first down.

The drive finally ended when Robert Stein connected on a 23-yard field goal to give the Zips a 17-0 lead. The 19-play, 69 yard possession featured eight penalties, four on each side, and allowed Akron to keep the ball 12 minutes and 44 seconds.

On the ensuing kickoff, the ball bounced away from a Kent receiver and Andrew Pratt recovered it for the Zips. Kent finished the third quarter with a time of possession of only 4 seconds.

The Zips outgained the Golden Flashes 369-135, won the turnover battle 4-1, and had 26 first downs to Kent’s 7. The Akron defense held Kent to just 10 total yards rushing.

Akron, who became bowl eligible last week with their victory over Buffalo, now waits for the invitation to the bowl game they will be a part of.