To the Elite Eight 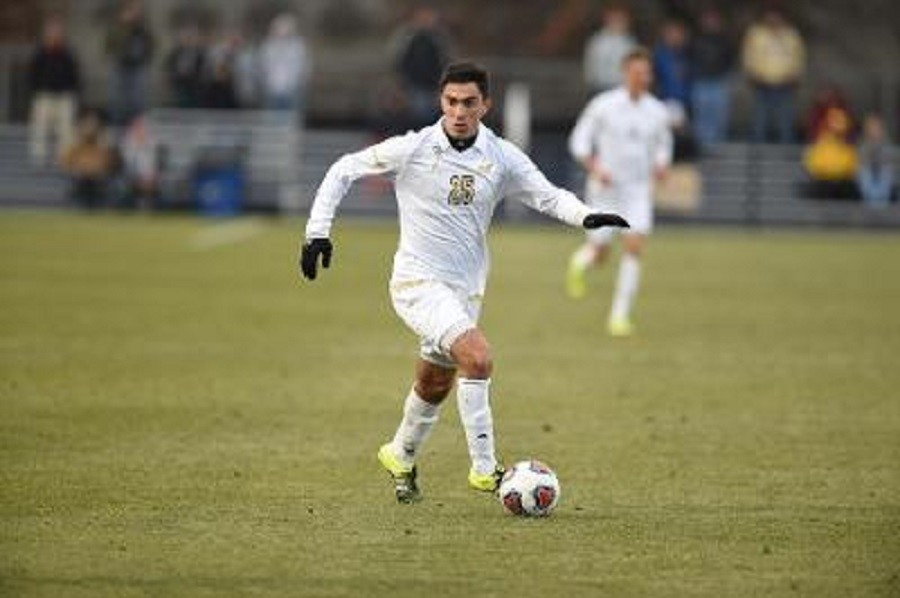 Goncalo Soares works the ball down the pitch against SMU.

The third-seeded Zips (17-3-2) will now face the 12th-seeded Creighton Bluejays here on Saturday starting at 4 p.m. The winner will head to Kansas City, Kansas for the College Cup.

Two of the three goals on Sunday were own goals – goals that are accidently hit into their own net usually by a defensive player – with the final one working to Akron’s advantage.

The scoring started in the first half when Adam Najem, who was at the top of the box, fed a pass to Stuart Holthusen. Holthusen, who controlled the ball along the end line, found Goncalo Soares just outside the six-yard box. Soares took the pass and got it past the SMU goalkeeper, Michael Nelson, for his second goal of the year and a 1-0 Akron lead at the 24:53 mark.

Sean Sepe nearly gave Akron a 2-0 lead when he missed connecting at the 27:43 mark — his attempt in the box went just high.

A failed attempt of clearing an SMU (15-3-4) corner kick by Bryce Clark at 31:11 allowed the Mustangs to square the match at one when a header by Brad Ruhaak deflected into his own goal.

But as fate would have it, the Mustangs would repay the favor of the own goal at 42:42, when Richie Laryea’s pass bounced off SMU midfielder John Lujano’s foot and into the net for the game-winning goal.

For the game, Akron outshot SMU by a 40-13 margin. In doing so, the Zips obliterated the school record of 34 set in a 2-1 quadruple-overtime victory over Northern Illinois in 2001 and in a 4-0 triumph over Robert Morris in 1997.

Akron also had 19 corner kicks during the match, setting an NCAA Tournament record for a regulation game. Connecticut holds the mark of 20 in a 2-1 quadruple-overtime win over Hartford in 1999.

“Got to be proud of the effort and we are moving on,” Akron head coach Jared Embick said. “Now we have to get back to work and get ready for the next game.”

That next game’s opponent is no stranger to the Zips. It was the Bluejays who advanced 5-4 on penalty kicks in the third round of the NCAA Tournament in 2012 after the two sides fought to a 1-1 double-overtime draw. Akron looks to avenge that loss and advance to the College Cup.