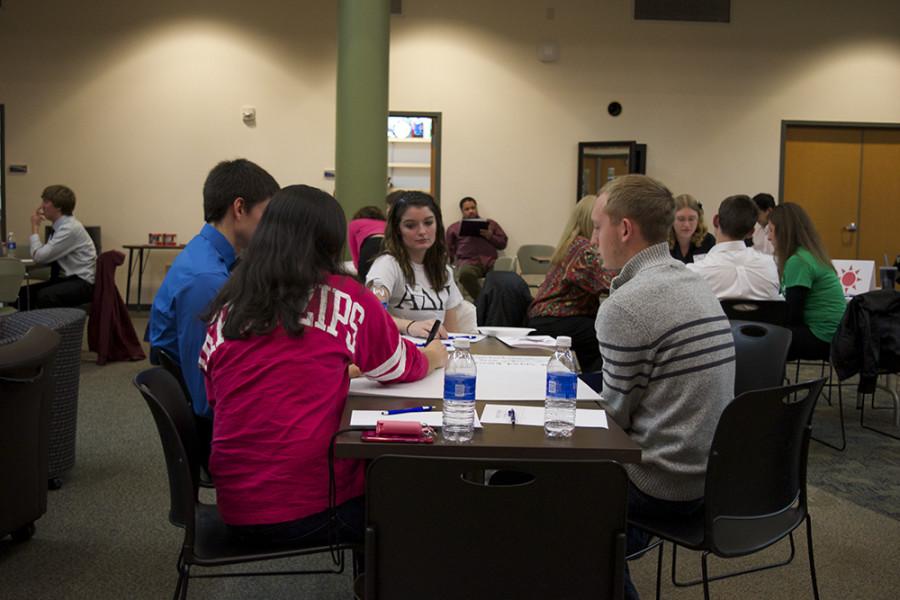 Students participated in a preliminary round for the Hult Prize Competition on Nov. 23.

Last Monday, Nov. 23, around 30 students assembled in the Honors College Common Room for an opportunity to earn one million dollars.

These students participated in the preliminary stages of the Hult Prize Competition, the world’s largest student case competition designed for social good.  This competition is intended to “crowd-source” world-changing ideas from teams of university students.

Ahmad Ashkar conceived the idea for the project when he was an MBA student at the Hult International Business School.

Students gathered in the Honors College competed for a spot on The University of Akron’s team. Each university may have a team of three to four students who are tasked with solving a major international challenge picked annually by former President Bill Clinton.

Past topics ranged from the clean water crisis to global energy poverty.

This year’s challenge is “crowded urban spaces.”  More than 20,000 students participate in the competition, but only one group can emerge victorious. The Hult family awards one million dollars of seed capital to the group with the most viable solution.

A distinguished panel of judges was present to observe and scrutinize the students as they vied for a spot on the team.  In order of introduction, the judges were: Bill Paolillo, Erin Ahrens, Shad Stinson, Ravi Krovi, and Ian Schwarber.

The event, which was hosted by Honors College Dean Lakeesha Ransom, consisted of three “challenges,” in which the prospective team members completed various tasks related to teamwork and cultural understanding.

The first challenge called for groups of students to construct the tallest tower possible using strands of uncooked spaghetti, marshmallows, and a short piece of giraffe-patterned duct tape.  Under the watchful eyes of the judges, students struggled to construct sturdy, tall structures.  After the activity, Ransom revealed that the challenge was representative of working with limited resources, a key facet of the Hult Competition.

During the second challenge, students played a card game called “Social Enterprise” with limited time to read the rules and an inability to speak to one another.  When asked to switch groups, they struggled to adapt to the perceived rule changes of the other groups.  This challenge demonstrated the importance of understanding cultural variances.

The third challenge presented students with giant pieces of paper on which they brainstormed some implications and solutions regarding life in crowded urban spaces.  Students switched tables with other groups, and were asked to select the most “out-there” idea from the other group’s paper.

As the event came to a conclusion, it was revealed that the judges were deliberating and would narrow the field as soon as possible.  Results are pending.