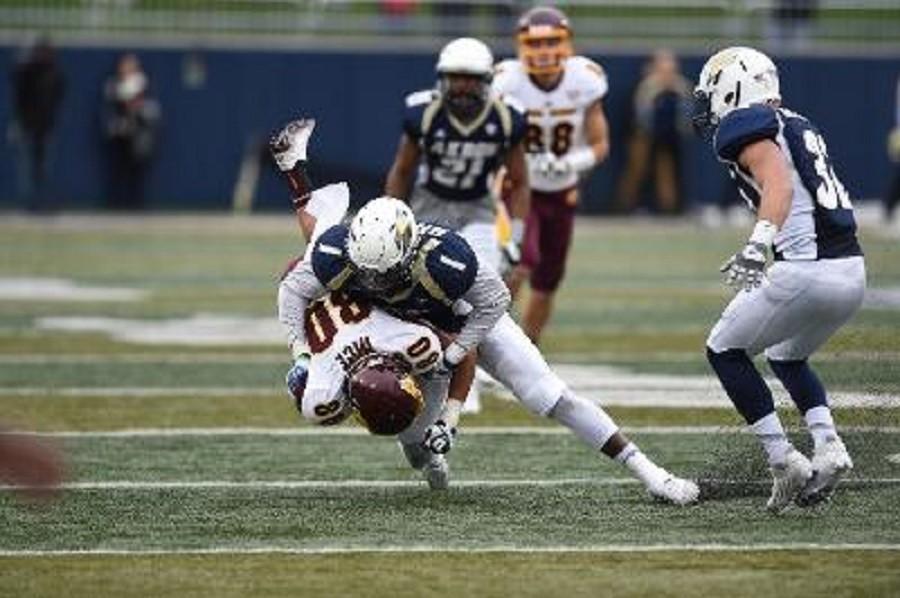 Brown has started all 12 games this year and led the Zips with 108 tackles, 17.5 tackles for loss, and 10.5 sacks. Brown has also been responsible for three forced fumbles, two breakups, and an interception.

Brown’s statistics allow him to lead the league in sacks and tackles for loss; he’s ranked seventh in total tackles. He was named preseason first-team All-MAC selection by various media outlets. Brown ranks No. 8 in the nation in sacks, and his 17.5 tackles for loss ranks No. 13 in the country.

Also on Wednesday, five players were named to the All-Conference team. Brown was the only Zip to earn first-team All-MAC honors, and the only three-time first-team honoree among this year’s recipients.

A trio of Zips were named to the second-team All-MAC. First was senior nose tackle Cody Grice. One of the team’s captains, Grice has started all 48 games of his collegiate career. He was a preseason All-MAC selection with 24 tackles, 4.0 tackles for loss, 1.5 sacks, and a fumble recovery on the season. Offensively, the nose tackle-turned-fullback had 19 carries for 33 yards and four touchdowns. Grice was a first-team All-MAC selection in 2014.

Third was senior defensive lineman Rodney Coe, a transfer from Iowa State University. He has started 10 games this year at defensive tackle, and has 43 tackles, 7.5 tackles for loss, two sacks, three breakups, three hurries, and a forced fumble. Coe was a preseason All-MAC selection. He is part of the front four that combined for an 89.8-yard rushing defense which ranks first in the MAC and No. 3 nationally.

Making the third-team All-MAC is defensive lineman Jamal Marcus. As a transfer from The Ohio State University, Marcus started nine games at defensive end. A preseason All-MAC honoree, he has 26 tackles, 11.5 tackles for loss, 5.5 sacks, a team-best 10 hurries, and a fumble recovery.

The Zips (7-5 overall, 5-3 MAC), under the guidance of fourth-year head coach Terry Bowden, are awaiting a bid to a postseason bowl that will be announced no later than Sunday, Dec. 6.